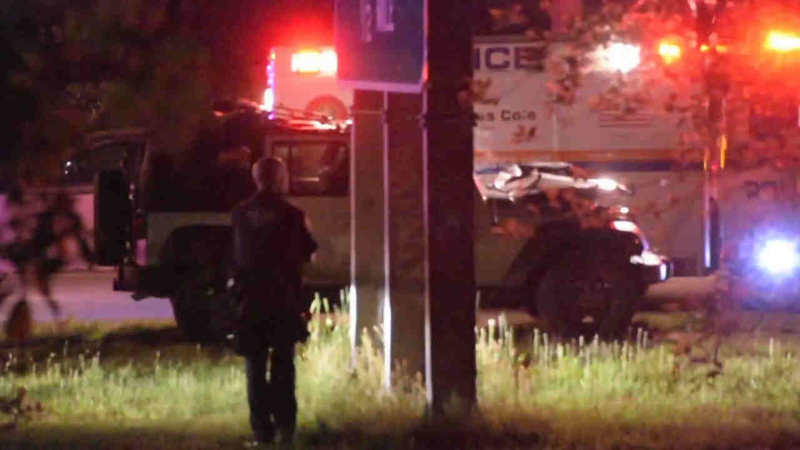 LEVITTOWN, Long Island (WABC) -- Two people died and a child is in critical condition after they exited their vehicle following a multi-car crash on the Wantagh State Parkway late Tuesday.

Police say five vehicles were involved in the accidents, which happened southbound lanes of the parkway between exits W3 and W4 just after 11 p.m.

Authorities say the incident began when a Nissan Murano driven by 33-year-old Reina Olivera rear-ended a Honda CRV driven by 50-year-old Ana Ramirez, and both vehicles came to rest in the left lane. A passenger in the Honda, identified as 61-year-old Nicolas Ramirez, and Olivera -- who was holding her 3-year-old daughter -- exited their vehicles and were standing in the left lane, apparently exchanging information.

It was then that a Toyota Corolla driven by 41-year-old Michael Martino came upon the vehicles stopped in the left lane, and police say when he began to slow down, he was rear-ended by a Honda Accord driven by 20-year-old Marbin Velasquez. The Accord then struck Olivera, Ramirez and the girl.

Ramirez was thrown into the northbound lanes, where he was subsequently struck by a Jeep Wrangler operated by 48-year-old James Maney. Ramirez was pronounced dead at the scene, while Olivera died a short time later at Nassau University Medical Center. The child was taken to NUMC in critical condition.

Olivera's neighbors in West Babylon are still coping with the news.

"She was a beautiful girl, and the baby," neighbor Sofia Miaris said. "I'm really upset about it."

There appears to be no criminal liability involved in the incident, and the investigation is ongoing.

A similar incident happened just a few weeks ago on the LIE, when a car driven by an off-duty NYPD officer slammed into two young people who had gotten out of their car after it broke down. And in Orange County earlier this month, a truck killed three people, including a child, who were standing on the side of I-84 after their car ran out of gas.

Experts say that if you must get out of your car after an accident, it is imperative that you get out of harm's way.

"The number one rule is to try to get away from traffic," Steven Rajczyk, of AAA North Jersey, said. "Each situation is different. There is no one, hard, fast rule."

Ideally, Rajczyk said, you should stay in your car and call 911.

"You got stop and think, you know, if I get out of the car and get struck by another vehicle, I'll probably be killed," he said. "If I stay in the vehicle, I might have a little chance."