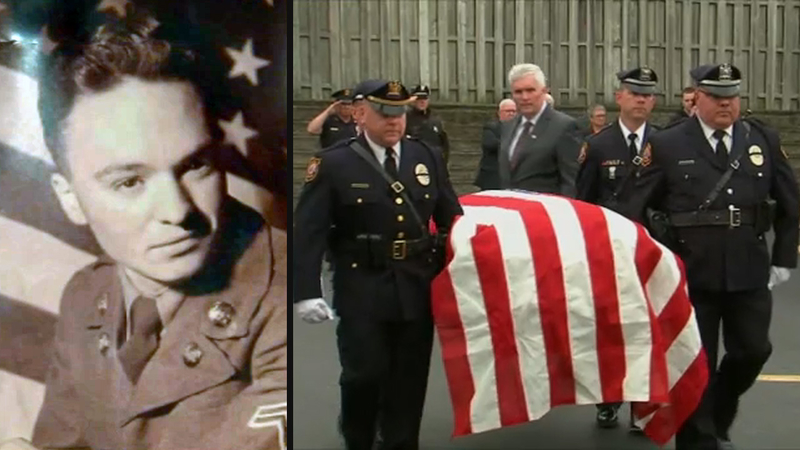 EDISON, New Jersey (WABC) -- A Korean War hero who died as a POW was laid to rest Tuesday in his hometown of Edison, New Jersey.

U.S. Army Sgt. Frank Suliman was in his 20s when he fought against members of the Chinese People's Volunteer Forces in North Korea as a member of the Army's 9th Infantry Regiment in the 1950s.

He died of pneumonia after he was captured and sent to a prisoner-of-war camp at Pukchin-Tarigol.

After his death, he was awarded the Purple Heart for his service. Had he lived to this year, he would've been 89 years old.

"No medication, no food, he was freezing," brother Robert "Bucky" Suliman said. "You're not going to live if you're sick...People died. People said Frankie died."

He had left six brothers and three sisters, along with his parents, after deciding the Army would be a better option than searching for a job with the economy back home. He reenlisted and stopped home briefly before his new tour began.

"He was home two weeks, and the war started," Anderson said. "And they called him, and that was the last we saw of him."

Suliman's remains were returned to the U.S. in January after President Donald Trump made a deal with North Korean leader Kim Jung Un.

Family, friends and loved ones gathered at the Boylan Funeral Home in Edison Tuesday, followed by burial at the Brigadier General William C. Doyle Memorial Cemetery.

Suliman is survived by sisters Anderson and Mary Yaverski, and brother Robert. Members of Edison's police and fire departments were also in attendance to pay their respects.

"Luckily, the DNA, they found Frankie," Robert Suliman said. "Even though it's one bone, at least we know he's here. So I feel, I'm grateful."

The siblings lost another brother, Marine Jimmy Suliman, in Iwo Jima. His remains have not been identified.

Still, time took nothing away from the Sulimans' hometown to honor their lives.

Edison honored the family long ago, naming Suliman Street after them.