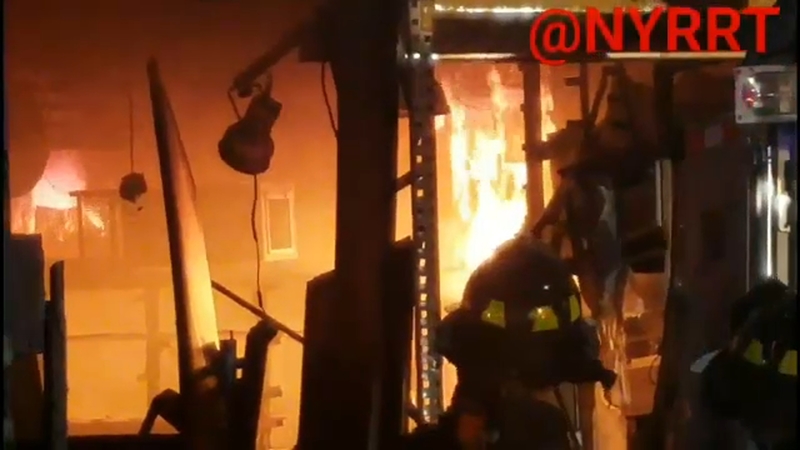 GREENPOINT, Brooklyn (WABC) -- A three-alarm fire burned through a large warehouse in the Greenpoint section of Brooklyn early Friday.

The fire broke out in a warehouse housing a woodworking business on Van Dam Street around 2:30 a.m.

Firefighters were forced to battle the blaze from outside as the roof began to sag, making the building unsafe.

"It was a heavy body of fire on arrival, with the deterioration of the roof, so we had to withdraw our people and perform a defensive operation from the exterior," FDNY Assistant Chief of Operations Wayne Cartwright said.

Some 138 firefighters and EMS responded to the scene and after a few hours were able to switch to monitoring hot spots.

They used a drone to have an eye on the inside of the building.

Neighboring businesses watched and hoped that the flames wouldn't spread.

Some businesses did sustain some water and smoke damage.

Daylight revealed the extent of the damage to the woodworking warehouse.

"You can see the roof hanging, what are you going to do?" Eyewitness News asked

"Find another job," one employee said.

Despite the unseasonably cold temperatures and the wind conditions, officials said it did not hinder their firefighting efforts.