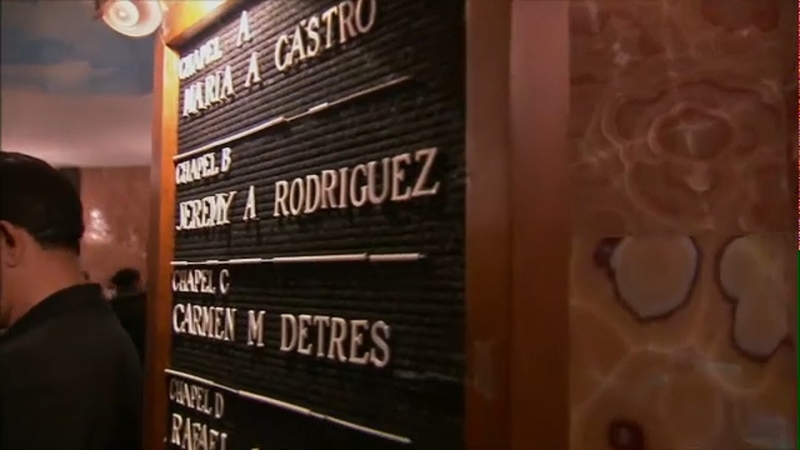 WASHINGTON HEIGHTS, Manhattan (WABC) -- There was chaos at a funeral home in Washington Heights when families showed up for services - only to find out the bodies of their loved ones are not there. In some cases, families faced an even more shocking and disturbing discovery - the wrong body had been brought in.

There were four wakes scheduled Sunday night at the RG Ortiz Funeral Home - and all four ended with families furious.

"It was the wrong person with my grandmother's clothes," said Annerys Paulino.

Relatives tried to mourn Maria Castro, 80, only to learn her body was nowhere to be found. Three and a half hours later, they brought in a casket. Eyewitness News is told the casket contained the wrong body dressed in their grandmother's clothes.

Finally at 8:30 p.m., half an hour before the viewing was supposed to end, their grandmother was delivered. They paid more than $7,000 for this service.

Jeremy Rodriguez's family paid $11,000 for their 24-year-old to be buried with dignity and respect. Relatives say when they arrived, someone else's body from the night before was still in their chapel. When Rodriguez' body finally arrived hours late, the family says they had to wheel him in and wheel out the other casket, because there was no staff on hand.

"This was probably one of the more horrendous moments I ever experienced in my life," said Rodriguez's cousin, Elizabeth Felix.

Mourners explain that there was only one woman working at the funeral home on Sunday night, and she was taken away by ambulance.
"The lady who is on site collapsed. Families called an ambulance for her - could not take us asking so many questions and complaining. Horrendous," added Felix.

Nancy Rivera paid $5,000 - she says her mother's body also arrived hours late. Plus, there were no rosary beads as requested, no cross, and the flowers that were ordered were just dumped in the front vestibule.

"I just happened to turn around and saw the flowers. Take them and put them in the room," Rivera said.

Rafael Garcia loved a good joke in life, but his family is not laughing. They paid $10,000 only to have him arrive three hours late, and in someone else's clothes.

"If you loved your loved one, do not bring them here. This is inhumane," says Awilda Torres.

Eyewitness News reached out to RG Ortiz Funeral home for comment - so far there has been no response.

The families paid thousands of dollars for services they argue they never received.