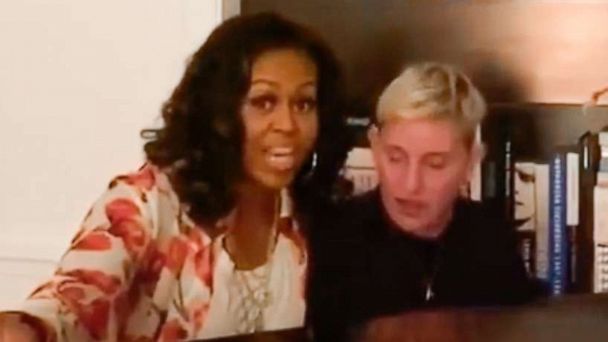 Mrs. Obama recently released a guided journal, "Becoming: A Guided Journal for Discovering Your Voice" which is based on her best-selling 2018 memoir, "Becoming."

In the video, Obama tells DeGeneres what to expect. "The purpose of the journal is to write down your own story of Becoming....to chronicle your memories, your thoughts, your ideas, your impressions...because every story matters," she tells the television host. "Even yours, Ellen."

She then asks Ellen, "What is your story?" Check out the hilarious clip:

The journal will include more than 150 questions and quotes that "resonate with key themes in Mrs. Obama's memoir," according to the publisher, Clarkson Potter, an imprint of Random House.

The components are designed to, "help readers reflect on their personal and family history, their goals, challenges, and dreams, what moves them and brings them hope, and what future they imagine for themselves and their community."

Obama recently received a Grammy nomination in the best spoken word category for the audio version of "Becoming."

The memoir shines a light on her childhood, life with Former President Barack Obama, their time in the White House and more. It was an immediate success, selling two million copies in just 15 days, according to the book's publisher.
Report a correction or typo
Related topics:
abc newsnational
Copyright © 2020 ABC News Internet Ventures.
More Videos
From CNN Newsource affiliates
TOP STORIES