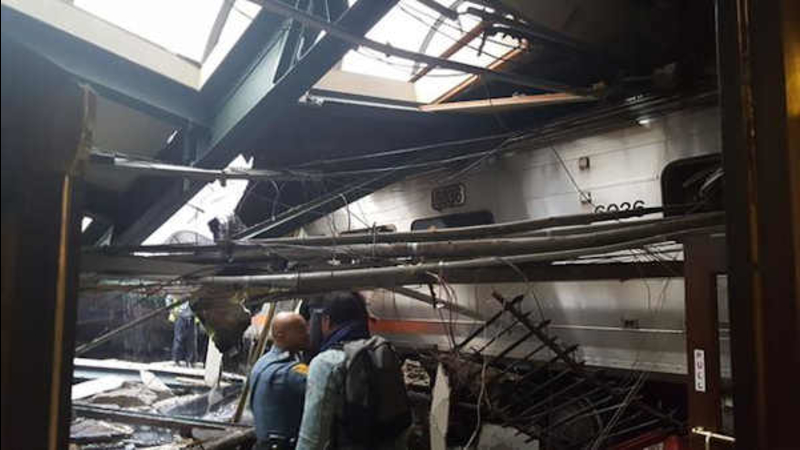 Another water main break in Hoboken

HOBOKEN (WABC) -- Water service has been restored in Hoboken after the city's second water main break in the past two weeks.

The latest break occurred in an 8-inch main on Monroe Street between 1st and 2nd streets in south Hoboken, just blocks away from the site of the first rupture at Harrison and Newark Streets on November 22.

Flooding started sometime after midnight but receded after SUEZ Water shut off service. Emergency crews have excavated the break and began making repairs, the company said, issuing the following statement:

"SUEZ crews have worked to restore water to all customers as a result of the main break this morning on Monroe Street between First and Second streets. While the water is restored, the roadway remains closed. We appreciate the patience of our customers as we repave the street and repair the sidewalk throughout the day."

At least 18 buildings in the area were without water Monday morning, affecting about 100 customers.

"I came out and there was just water like filling the area and I'm thinking, did it rain? No," resident Jenny Klion said. "It was the very beginning and nobody was there, and I did call and they did come. But I filled up pots because I didn't know."

Last week's break involved a 24-inch main and left many homes and businesses without water, prompting the city to bring in water tankers.

Just on Sunday, SUEZ Water announced that service had been fully restored to the entire city following the original break, and roads in southwest Hoboken reopened to traffic. The water supply was tested and deemed safe for consumption.

Developing: Another water break in Hoboken is causing flooding. Crews are on the scene and so are we. @ABC7NY pic.twitter.com/Q5SaWSd6Ix

SUEZ Water said the two breaks are not related, but added that more main breaks occur in the cold weather months.