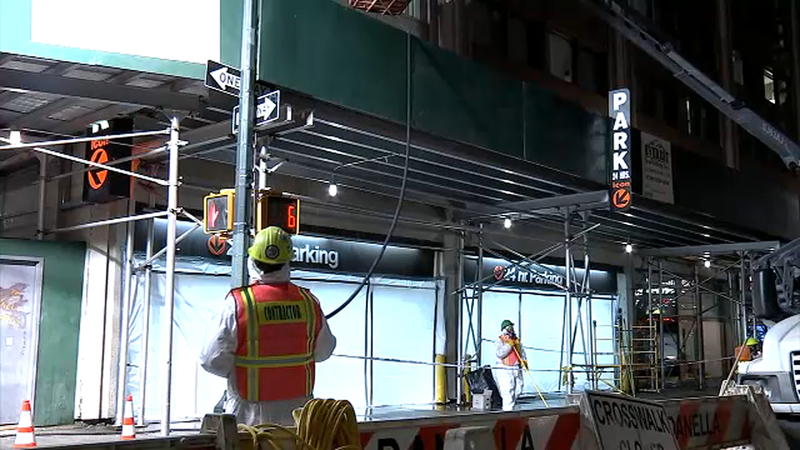 MIDTOWN, Manhattan (WABC) -- In an Eyewitness News exclusive, hazmat crews remained on the scene more than 24 hours after a water and steam leak spewed mud and dust in an area of Manhattan near Times Square.

On the edge of the theater district, a bustling stretch of 8th Avenue was a frozen zone Tuesday night.

Workers in Tyvek hazmat gear crawled around a hotel and its ground floor garage, scrubbing, powerwashing and vacuuming up the runoff, all under the watchful eye of New York City DEP supervisors.

The display of concern came one night after a water main burst, sending water gushing into super hot steam pipes.

It blasted clouds of steam and a geyser of mud onto 50th Street and 8th Avenue, leaving a layer of dust that looked like insulation, which coated cars and even clung to metal poles.

Once emergency responders cleared the scene, people walked and drove through all the mud, and filed into a garage to get their cars.

One commuter didn't think much of it. "Hopefully it's nothing hazardous but who knows what's underneath that ground," said Tyler Stern.

But Tuesday night, workers set up air monitors up and down the block. And that very garage has been sealed off to the public, amid fears that dirt may be laced with asbestos.

The city confirmed a small amount of asbestos was released during the incident, but said all precautions were taken and the area was immediately cordoned off.