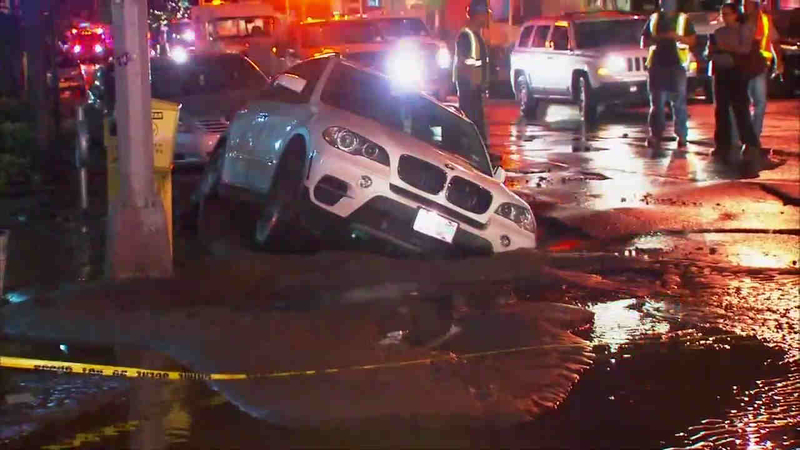 The break happened around 9:30 p.m. Monday at West 90th Street and Amsterdam Avenue, even causing a giant sinkhole that swallowed a BMW SUV.

Crews are still very hard at work making repairs, capping nearby gas lines and fixing the damaged roadway around the sink hole. The flooding stretches for several blocks down Amsterdam Avenue and is a nightmare for people who live and work in this area.

"It was just chaos and flooding," one resident said.

After billowing up from the asphalt, the flood waters wreaked havoc for residents and business owners.

"There was water coming from everywhere," resident Gray Grayson said. "Cops were running back and forth, because they couldn't tell where the water was coming from exactly."

According to the FDNY, the 12-inch main unleashed a river of water that quickly filled nearby basements and created the gaping sink hole.

"Never seen this here," resident Sarah DeBlois said. "You see it in Florida, right? The sink holes? And so it's unusual, I mean, this was not caused by a natural disaster."

Water and gas remain shut off to some nearby buildings, forcing many like Monique Lee to improvise to ensure her flower business doesn't take any other hits.

"We have no water," she said. "You see those buckets outside? I save the water from those outside in case we don't have any water for a few days."

"I got here, and there was water everywhere," artistic director and CEO Eduardo Vilaro said. "There were firemen everywhere, four-block radius closed down. It was crazy."