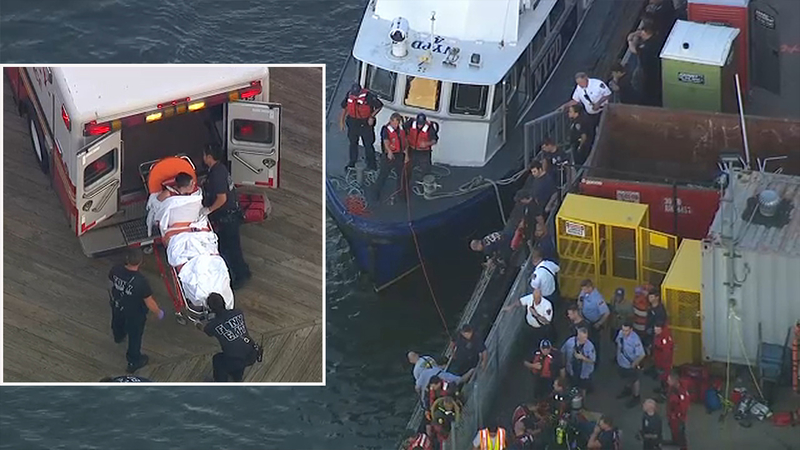 LOWER EAST SIDE, Manhattan (WABC) -- A woman who jumped into the East River naked was fished out during an hour-long search and rescue. It all came to an end when officers pulled her from under a dark Lower East Side pier.

The woman, in her 20s, jumped into the water under the Williamsburg Bridge just before 5:45 a.m. Thursday morning.

Good Samaritan Norman Pope, of the Lower East Side was "just passing by" and went in to rescue her. He said he quickly swam to shore.

"I'm looking around, I don't see anyone, so I just jumped, tried to save her, and that didn't work out too (well)," Pope told Eyewitness News.

Meanwhile, a phalanx of NYPD and FDNY first responders quickly flooded the area, searching for the woman.


By that point, she had drifted with the current south to under Pier 36.

They used flashlights to locate her before sending divers into the water.

They told her "stay right there, we are going to get you out," said NYPD Officer Vincent Fulgieri.

They followed her as she swam further south under the dark pier.

"It's very dark under there. We could hear her screaming, so we tried to maintain voice contact with her. We were advising her we were there to help her," an officer said. "However, she decided to swim a little further down and that's where ESU was able to grab her."

Officers said the woman was incoherent at the time. They asked her to stay calm so they could get her near the billings. However, when the divers went in, there was complete silence at that point.

"We tried to get somebody on each side of her," Fulgieri said.

Despite an uncooperative victim, the rescuers stayed with her, even as she briefly disappeared.
After more than an hour in the water, they finally grabbed her and pulled onto an NYPD Harbor boat.

NewsCopter7 was overhead as first responders wheeled a woman pulled from the East River to a waiting ambulance.

She was taken to NY Downtown Hospital for a psychological evaluation. The man was not injured.