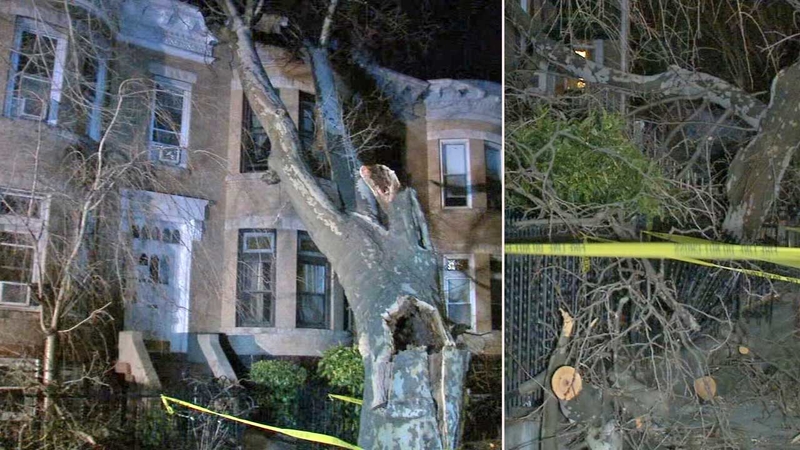 In Brooklyn, a tree landed on top of a house in Bay Ridge.

Video showed the tree blocking the sidewalk and leaning on the roof of the building.

The tree spilt near the base, coming down on the home along Bay Ridge Parkway.

Fortunately no one was injured.

FDNY firefighters were called and cleared the doorway.

Elsewhere, the wind wreaked other kinds of havoc, knocking over trash cans, signs and even some utility poles.

In New York City, several hundred were left in the dark, along with nearly 3,500 in Westchester County.

New Jersey was hit even harder, with more 17,000 outages reported.

The strong winds have caused a large barge to break free from mooring in Newark Bay and become grounded in the cove bet. 19th & 21st St. No danger, however, all must remain clear until crews can remove. @CityofBayonne @DavisForBayonne pic.twitter.com/5xbXa0YcHi

In Bayonne, the strong winds caused a large barge to break free from its mooring in Newark Bay.

No one was hurt but the cove area between 19th and 21st streets remained off limits as crews worked to free the barge.

And service on NJ Transit's Morris & Essex line was expected to be suspended all day Tuesday after catenary lines collapsed onto the tracks amid "extensive weather related damage" in Maplewood.