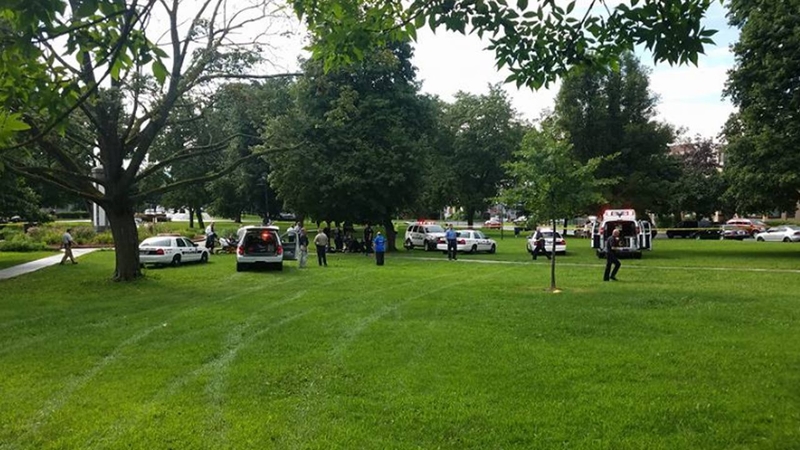 POUGHKEEPSIE, New York (WABC) -- One person is dead and four were injured after a lightning strike inside a park in Poughkeepsie Friday afternoon.

The incident happened in Mansion Square Park around 4 p.m.

The victims have not been identified but the deceased is a 50-year-old man. Two others remained critical but stable Saturday morning.

A fast moving and powerful thunderstorm left a small group in Mansion Square Park with little time to react, when lightening reportedly struck a tree and sent dangerous volts of electricity of through nearby benches and the ground.

Police first started receiving 911 calls about the lightning strike just after 4 p.m. Friday and when medics arrived on scene they discovered four men and a woman injured. The five had been looking for shelter in the storm when the lightning struck the tree where they had gathered.

"We heard the lightning strike, you know, the ground shook. It was crazy and then we see people running in the park over here," said Sam Hale, a witness.
"I saw three gentleman on the bench two of them leaning against each other, a third leaning against them a young lady with a purse that was still smoking and smoldering," said Wilford Hutchinson, a witness.

Patricia White said her brother, Franklin Mekeel was one of the men shocked while sitting on this bench. "He got blown off the bench and his heart stopped. They did CPR for 30 minutes, he's in ICU right now," White said Friday. His status was unclear Saturday morning.

Three were taken to Vassar Brothers Medical Center in critical condition while two others with less serious injuries were taken to MidHudson Regional in good condition.

Tim Massie, spokesperson for VBMC, said, "The three patients brought to Vassar Brothers were not struck by lightning. They were under a tree that was struck and the charge conducted through the ground, striking them."

Police are asking anyone who may have witnessed this incident to call the City of Poughkeepsie Police at 845-451-7577.

"It's a tragedy, but the thing is lightning is dangerous and can be a killer and the last place that you want to be anywhere, but specifically in a park with multiple trees, is under one of those trees," said Rob Rolison, mayor of Poughkeepsie.
Related topics:
weatherpoughkeepsielightningweather
Copyright © 2021 WABC-TV. All Rights Reserved.
TOP STORIES
Statewide fireworks to celebrate NY hitting 70% vaccination milestone
COVID Updates: NYC Mayor de Blasio briefing | LIVE
Actress Lisa Banes dies after being hit by scooter
Hundreds of New Yorkers given expired COVID shots
Family cat killed by stray bullet through window in Connecticut
Search for gunman who shot off-duty FDNY EMT's car with kids inside
Divers pull person from Flushing Creek after 911 call
Show More
NY Lottery pauses prize payments after computer systems malfunction
Adams leads in NYC mayoral poll; Early voting underway
AccuWeather: Spotty showers to partly sunny
E-scooter crashes on the rise | Check stats in your neighborhood
Vaping arrest turns into violent encounter with police in Ocean City, Maryland
More TOP STORIES News