Here are the 5 most vulnerable cities during hurricane season

WABC
With hurricane season upon us, NOAA released a list of the top five cities in the country that are most vulnerable, according to historic hurricane data.

These vulnerabilities, AccuWeather explains, are all tied to the cities' locations and geography in some way.

New Orleans is one of the only large cities in the U.S. whose elevation is actually negative, with more than 50 percent below sea level. Though the levee system has drastically improved since Hurricane Katrina, the land around the city continues to sink, which means tropical storms continue to pose a threat.

The city's location makes it susceptible to hurricanes coming from both the Gulf of Mexico and the Atlantic. Because it is located by the shallow Tampa Bay, water can pile up into the city and cause a lot of damage. Fortunately, though, Tampa has not been hit directly by a major hurricane since 1921, though many major storms have passed nearby.

North Carolina's Outer Banks jut out much farther east than any of Florida's cities. Cape Hatteras, in particular, is close to the Gulf Stream. This means it's exposed to warmer ocean temperatures, which makes for stronger hurricanes.

The Florida Keys are an archipelago of islands that extend for 113 miles off the southern coast of Florida. Key West, known as the Southernmost City in the Continental United States, is the farthest out from the mainland. This makes evacuation a challenge and puts the city, which has a 16 percent chance of being impacted by a hurricane in a given year, at greater risk.

Because Miami is so far south, it's likely to see Category 4 or 5 hurricanes. Most of the city's 441,000 people live less than 20 miles from the coast. The strong storm possibility and dense population, AccuWeather says, are a "recipe for disaster" should a hurricane strike.
Report a correction or typo
Related topics:
weatheraccuweathertropical stormnoaau.s. & worldhurricaneaccuweathersevere weather
Copyright © 2020 WABC-TV. All Rights Reserved.
ACCUWEATHER 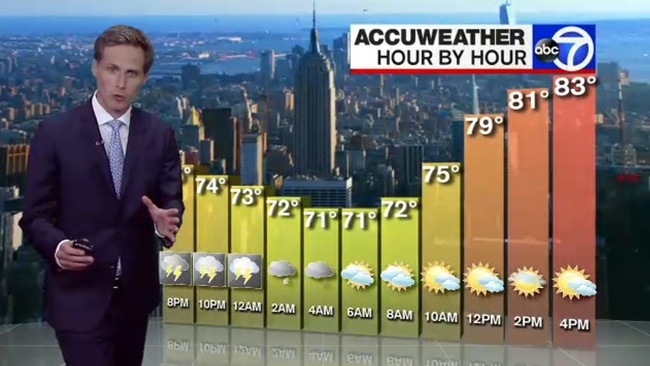 Why do we set off fireworks on July 4th?

DIY backyard water park-style ideas for your family this summer