Tropical storm and flash flood warnings were issued for New York City, Long Island, New Jersey and across the Tri-State.

Lee Goldberg has an exclusive update on Tropical Storm Fay.

Just before 8:00 p.m., Tropical Storm Fay was centered near Jackson Township, New Jersey with winds of 45 mph and moving north at 14 mph.

Breezy conditions and gusty winds persisted from New Jersey to Long Island into the evening, but the heavy rain had mostly dissipated.

Fay was the third storm to make landfall in the same general area of northern Atlantic County in the past decade.

The last tropical system was Tropical Storm Irene in 2011, and Sandy in 2012, which was post-tropical.

Many subway stops across NYC were flooded from the heavy rains. At 149th St. and Grand Concourse, storm water poured down the stairs. At the Court Square stop in Long Island City, rain from the storm grate showered the platform. MTA officials say it invested heavily into improving drainage and pumping systems, proving the subways might be more resilient now to a tropical storm.

A large tree came crashing down outside a home in Maplewood, in the midsts of heavy winds and rain.

Thankfully no injuries after this large tree topples over onto thr front yard of a home, damaging a car in the driveway in Maplewood NJ during the height of storm Fay...the story at 11 @ABC7NYNewsDesk @ABC7NY pic.twitter.com/ojqxn0dVwJ

In Hackensack, a high-water truck rescued 2 people and a cat from their vehicle.

Authorities urged drivers to avoid flooded areas and to not drive around barricades.

Along the Jersey Shore, many streets were also flooded and the wind kicked up too. Fay also kicked up the surf and winds were strong.
EMBED More News Videos

"This is the worst I've seen it in a while, but the surf looks okay," Rich Giuditta of Avon by the Sea said.

Scaffolding attached to a six-story building in Long Branch was battered by the wind. Crews went to the scene to try to secure location as police and fire block off the area.
EMBED More News Videos

Scaffolding is in danger of collapsing in Long Branch, New Jersey due to high winds from Tropical Storm Fay.

Nearly 3,000 were without power on Long Island after heavy winds.

Fast-moving Tropical Storm Fay churned up the East Coast soaking New York City, New Jersey and other parts of the Tri-State with 2-4 inches of rain.

Monmouth County Sheriff Shaun Golden says there's been some flooding ain the usual spots, but it's what the storm means to beachgoers Saturday that the sheriff says we need to worry about.

"We have to watch out for rip currents be sure to ask lifeguards about it if you're going in the water tomorrow," Golden said.

The summer storm's impact on New York City was expected to be "pretty limited," but Mayor Bill de Blasio said it would be a bad night for outdoor dining - the only sit-down service allowed at city restaurants because of the pandemic.

"If you were going to go out tonight, instead order in and keep helping our restaurant community," he said.

President Donald Trump said the storm is being monitored and that the Federal Emergency Management Agency was poised to help if needed.

"We're fully prepared. FEMA's ready in case it's bad. Shouldn't be too bad, but you never know," Trump told reporters while departing the White House for Florida. Trump postponed his Saturday rally in New Hampshire due to the weather, Press Secretary Kayleigh McEnany said. 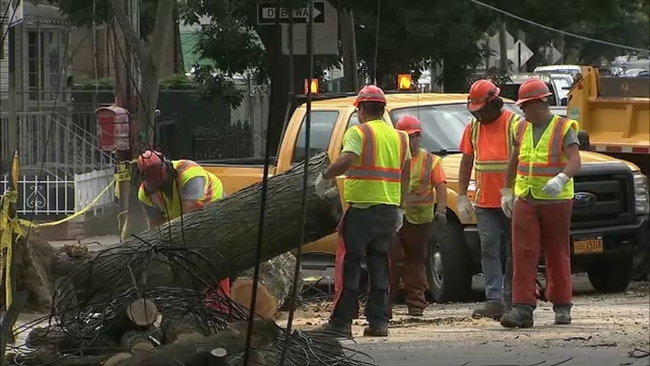 5-year-old shot, killed point-blank while outside in NC