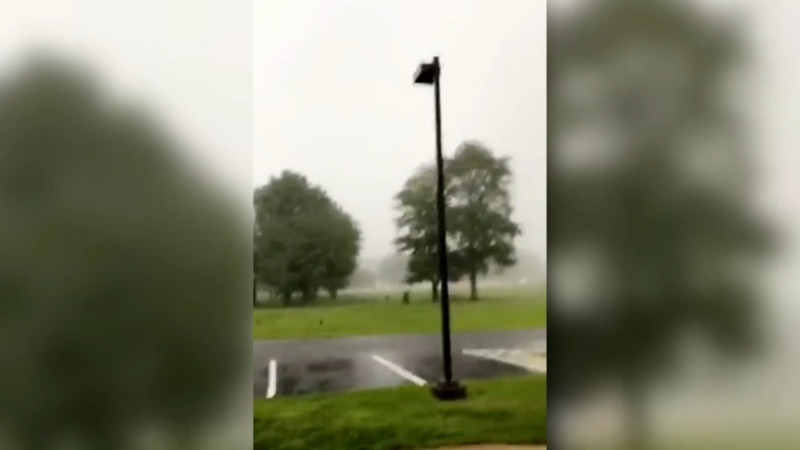 FAIRLESS HILLS, Pennsylvania -- A Pennsylvania family is seeking answers after they say their 13-year-old son was denied entry into the Lower Bucks County Chamber of Commerce offices during Wednesday's lightning storms in the area.

The Giambrone family told our sister station WPVI in Philadelphia that their son Colin was fishing in a nearby lake when the storms rolled in. The Giambrones said while Colin waited to be picked up, he ran to the nearest building -- the chamber of commerce.

The teen was fishing in a nearby by lake. As he waited to be picked up the teen captured a lightning strike outside the Chamber.@6abc pic.twitter.com/tt2wYMoPhQ

After knocking, the family said a man at the door told Colin he could not enter and was left to wait outside.

In videos recorded by Colin, also obtained by WPVI, the teen is seen standing outside with a fishing rod in hand as he then pans to the closed door. In a second video, the teen is heard shouting as a lightning bolt comes down in what appears to be close proximity.

The Chamber responded in statements on their Facebook page Wednesday.

In one post the Chamber writes “we follow a security protocol” adding they did provide shelter from the rain.

The chamber received some backlash Wednesday evening after the story was shared online.

The Lower Bucks County Chamber of Commerce initially posted a letter on their Facebook about the incident which said in part, "Our facility is a secured location and a result we follow a security protocol. We understand that the individual needed shelter from the rain which we provided. We will continue to do our best to provide everyone with a safe environment."

That message was followed up with one from the Chamber's Executive Director, Minesh Pathnak, that said, "I personally would like to apologize for the events that occurred this afternoon. The current policy & procedures will be reviewed with the Executive Board at the next meeting."