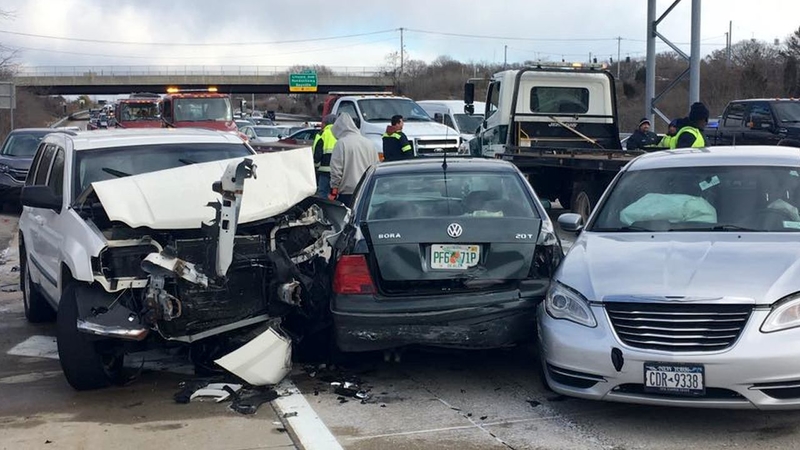 The multi-vehicle wreck, which involved a mini school bus that flipped over in the icy conditions, happened around 10:30 a.m. in the westbound lanes near Bohemia Parkway.

A look at the wreck scene:

A school bus with no children on board was found at a multi-car wreck on Sunrise Highway.

The bus had no children on board at the time and was found on its side. A tractor-trailer and dozens of other vehicles also were involved.

At least seven injuries were reported, and the westbound lanes were closed near exit 49 until late in the afternoon. Traffic was being diverted to the Sunrise Highway service road, and while the eastbound roadway was open, rubbernecking delays were extensive.

Emergency workers and road crews arrived as fast as they could, but for Leighann Wulff, it had already been a hair-raising trip.

"I got hit pretty bad, and the airbags came out," she said, crying. "And then, while I was sitting there, I got hit another six times. So it was pretty traumatic. I just kept thinking about my babies, make sure I was OK."

Shortly before the pileup, there was a multi-vehicle wreck in the eastbound lanes of the Long Island Expressway before Nichols Road in Holtsville (exit 62). There was no word on injuries, but the accident was described as a chain-reaction crash.

Some video of the LIE scene:
EMBED More News Videos

Roads were slick in Dix Hills, where video showed the LIE and the LIE service road:
EMBED More News Videos