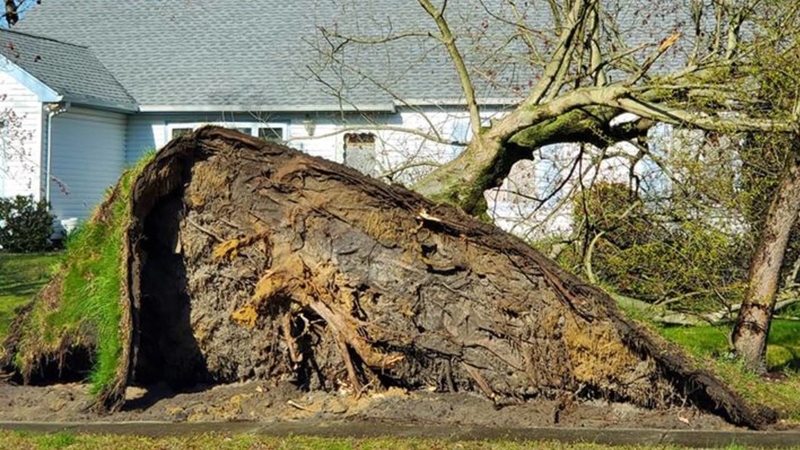 TOMS RIVER, New Jersey (WABC) -- Many areas throughout the Tri-State are spending Wednesday cleaning up after strong storms carved a path of destruction.

Particularly hard hit was Toms River, where officials said an apparent tornado touched down in the Melody Park and Twin Oaks neighborhoods and again in the area of Pepper Tree.

The National Weather Service later determined that no tornado touched down and attributed the damage to straight line winds, but officials said it resulted in hundreds of downed trees, private property damage to homes, cars, decks, pools, vehicles and fences.

The damage included a 24-foot travel trailer that went airborne and was dropped in an overturned position on a neighboring property.

A waterspout briefly became an EF-0 tornado as it crossed Route 35 eastbound from Barnegat Bay to the Atlantic Ocean, tossing and flipping several boats and assorted trailers at the Normandy Beach Yacht Club and damaging at least one home on south court before crossing into the atlantic and resuming its life as a waterspout

JCP&L crews worked on clearing trees from the power lines, and approximately 4,000 homes lost power during the storm.

Residents clearing brush and tree limbs from their properties are reminded to keep all vegetative material segregated from other debris when placing it curbside for collection.

Public Works will grind and recycle all vegetative debris and other debris such as siding and fencing will be collected and taken to the Ocean County Landfill for disposal.

No serious injuries or deaths were reported.