Tracking Tropical Storm Fay
WABC
By Eyewitness News
HACKENSACK, New Jersey (WABC) -- Fay has been downgraded to a post-Tropical Storm, but it was still powerful enough to bring down hundreds of trees, flood roads and cause problems across the Tri-State area.

Swimming advisories are now in place at 82 beaches across Long Island and a Wet Weather Advisory has been issued for a few NYC beaches.

There were no reports of any major injuries, but New York City recorded hundreds of reports of downed trees while drivers in New Jersey became stuck on flooded roads.

Many roads were left impassable as the flash flooding took effect.

In Hackensack, they had to send out a high water vehicle to rescue two cars stuck in the water near West Pleasantview Avenue.

A large tree came crashing down outside a home in Maplewood, New Jersey, amid heavy winds and rain. Fortunately there was no major damage.
EMBED More News Videos

Many subway stops across NYC were flooded from the heavy rains. At 149th St. and Grand Concourse, storm water poured down the stairs. At the Court Square stop in Long Island City, rain from the storm grate showered the platform.

MTA officials say they invested heavily into improving drainage and pumping systems, proving the subways might be more resilient now to a tropical storm.

Other city officials say they were well-prepared.

"Knowing that a tropical storm was storm coming and we may be getting significant rainfall, we had to keep crews out, a couple of dozen other trucks like this out on the streets," said Vincent Sapienza with the NYC Environmental Protection.

The remnant surf from Fay could be dangerous along the south shore of Long Island and at New York City beaches. A high surf advisory remains in place through 9 p.m.

Officials recommend against swimming in the waters surrounding Long Island Saturday due to concerns about elevated bacteria levels from storm runoff.

In New Jersey, Monmouth County Sheriff Shaun Golden says there's been some flooding in the usual spots, but it's what the storm means to beachgoers Saturday that the sheriff says we need to worry about.

"We have to watch out for rip currents be sure to ask lifeguards about it if you're going in the water tomorrow," Golden said on Friday.

Fay was the third storm to make landfall in the same general area of northern Atlantic County in the past decade. The last tropical system was Tropical Storm Irene in 2011, and Sandy in 2012, which was post-tropical. 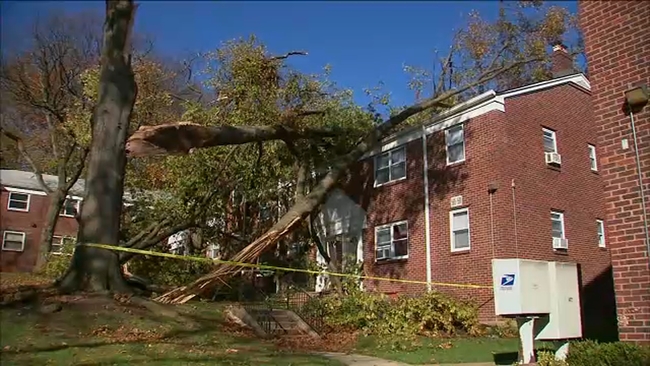