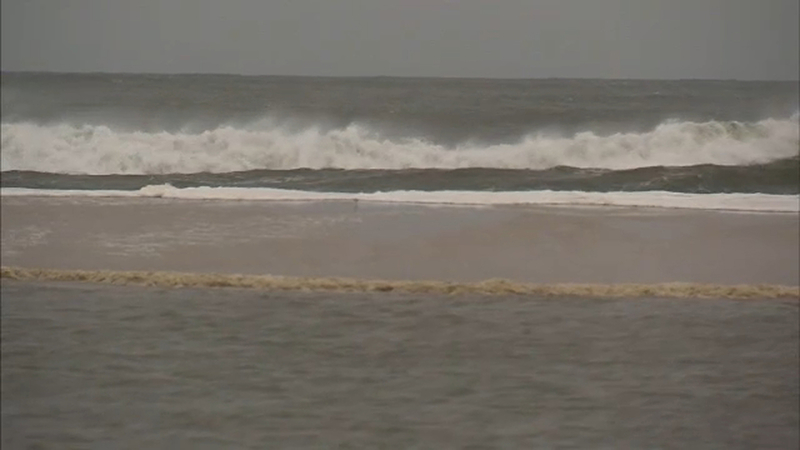 NEW YORK (WABC) -- Jose has weakened to a tropical storm as it stirs up dangerous surf and rip currents along the Long Island and New Jersey shores.

Forecasters said the storm was unlikely to make landfall, but expect the rough surf and rip currents will continue along the East Coast of the U.S. for several days.

Jose's center was about 195 miles south of Nantucket Island, Mass. Wednesday morning with winds of 70 miles per hour. It is forecast to pass well east of New Jersey's coast Wednesday.

Eastern Long Island was expected to be the hardest hit in our area, and crews geared up for heavy rain and wind. Dix Hills is serving as the base for emergency operations.

PSEG Long Island has bolstered its ranks with out-of-state crews to help work on any power outages and downed trees.

The head of state emergency management, Kevin Wisely, said that officials are especially keeping an eye on conditions in eastern Suffolk County.

Cuomo says it's better to "err on the side of caution" amid unpredictable weather patterns.

He says people should prepare their property and "use common sense" - and, if the storm gets bad, "just stay home."

In New Jersey, officials say a fishing pier at the shore that was rebuilt after Superstorm Sandy has suffered damage from high waves caused by Hurricane Jose.

And they fear the damage at the Belmont Fishing Club pier in Belmar may worsen during high tide.

Belmar Mayor Matthew Doherty says a support beam has already detached and pilings were knocked loose in the morning waves.

Construction on the pier was completed in 2015 after it was destroyed by Superstorm Sandy. Stephanie Engelstad, business manager for the private club, says they will have to wait until the storm is over to review the new damage.

Anthony Johnson reports from Belmar on how New Jersey is preparing for the storm.

Wave heights are expected to top out between 10 and 15 feet, with the strongest winds over eastern Long Island gusting up to 50 mph. Farther west, including the New York City area, winds can gust over 30 mph at times into early Wednesday.

Authorities are warning people to stay out of the ocean because of dangerous rip currents. Big waves caused by Jose swept five people off a coastal jetty in Rhode Island and they were hospitalized after being rescued.