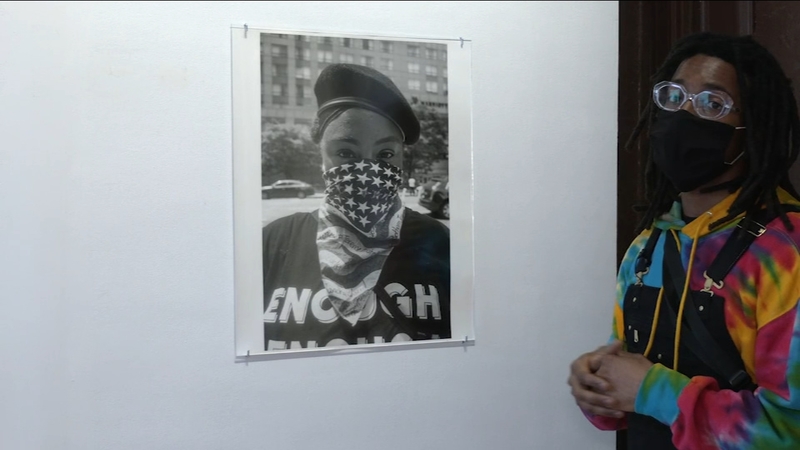 BEDFORD-STUYVESANT, Brooklyn (WABC) -- In Bedford-Stuyvesant, Brooklyn, there is a snapshot of the civil rights movement that spread throughout New York City and beyond last summer in the days following the death of George Floyd.

"Even in this day and age we are still fighting as a people," said artist Chris Cook. "The message is clear, police brutality is going on."

Fifteen images from Cook's Black Lives Matter series are now part of the "Am I Next?" collection at the Welancora Gallery. It's Cook's very first solo show.

"It's a lot of emotions that I felt, so I tried to pour that into some of the imagery," he said.

There is a combination of limited edition action shots and portraits like one of a woman wearing the word "enough" on a shirt, an American flag as a face covering with the names of Black victims of police brutality.

"What does it mean to you to have been so close, on the frontlines?" Eyewitness News reporter Crystal Cranmore asked.

"I just think it was a huge opportunity," Cook said. "It's a full circle. Because I am showcasing work in the community I grew up in."

"Sometimes it's difficult for young artists and curators to find a professional outlet to express themselves," said Ivy Jones, the founder of Welancora Gallery.

"I was particularly drawn to the images with signs," Jones said.

She spoke about what led her to name the exhibit, "Am I Next?"

"'Am I Next?' It's really the question Black people have been asking probably since the middle passage, to me it says we have a long way to go," Jones said.

Cook's work will be at the gallery through April 10.

More than 50 dogs and cats were evacuated to New Jersey after deadly tornadoes hit Alabama.