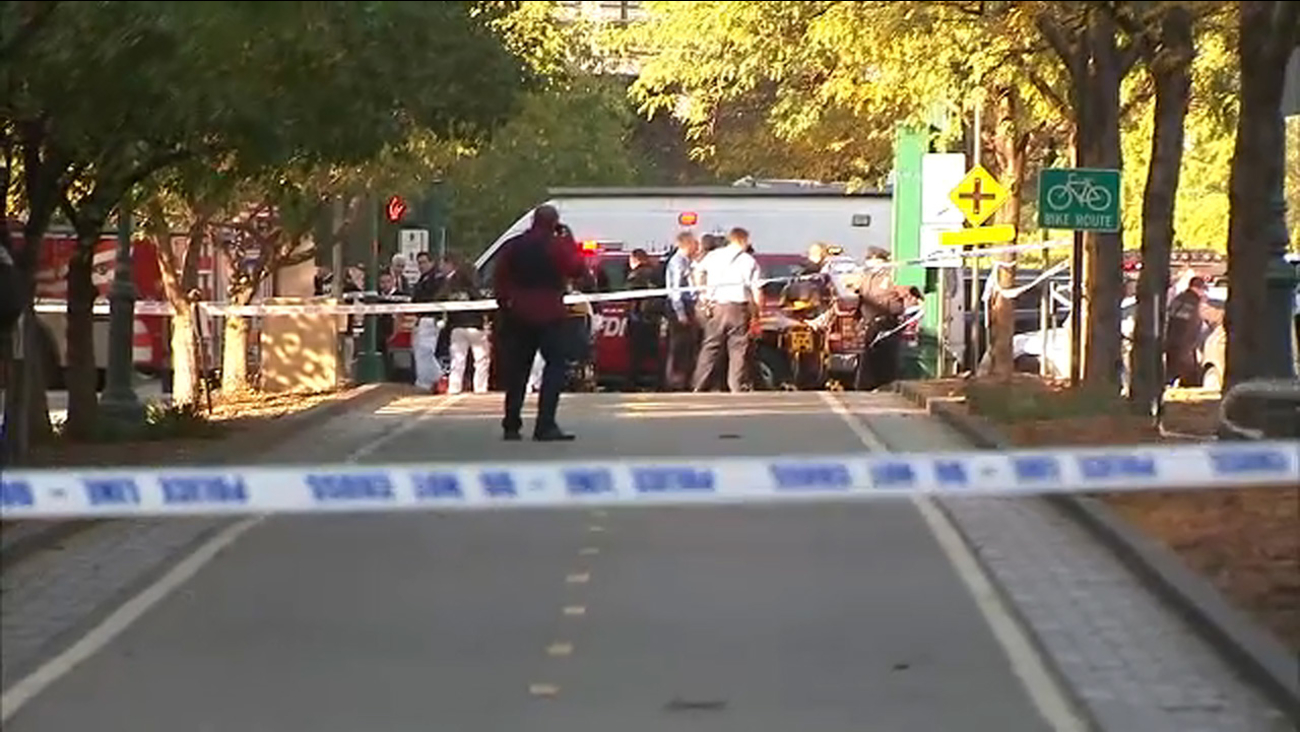 LOWER MANHATTAN, New York (WABC) -- Witnesses are describing the terrifying moments as a deadly incident being investigated as terrorism unfolded on the West Side Highway Tuesday afternoon.

At least eight fatalities and around a dozen injuries were reported when police say the driver of a white pickup truck drove onto the bike path and ran over several people before crashing into several other vehicles.

The sprawling crime scene runs several blocks, and a suspect who may have been shot by police is in custody.

A witness named Eugene spoke with Eyewitness News by phone, describing the horrifying scene he saw after leaving work at Pier 26.

"I heard something behind me, and when I turned, I saw a truck, a pickup truck, a white pickup truck, and he ran over two guys, and unfortunately, I went up to the bodies, and they had passed away," he said. "He kept going down on the bike path on West Street, down by the park. And then he hit a few cars, and then when I heard the cars get hit, I looked that way, and I heard gunshots. And then everybody started running."
EMBED More News Videos

Eugene said the driver then crashed into a yellow school bus.

Ramon Cruz was in the area at the time, and he said the driver did not appear to be bleeding when he exited the vehicle but was walking with a noticeable limp and was screaming.
EMBED More News Videos

Tom Gay, a school photographer, was on Warren Street and heard people saying there was an accident. He went down to West Street and a woman came around the corner shouting, "He has a gun! He has a gun!"

Gay said he stuck his head around the corner and saw a slender man in a blue track suit running southbound on West Street holding a gun. He said there was a heavyset man pursuing him.

He said he heard five or six shots and the man in the tracksuit fell to the ground, gun still raised in the air. He said a man came over and kicked the gun out of his hand.

Uber driver Chen Yi said he saw a truck plow into people on a popular bike path adjacent to the West Side Highway. He said he then heard seven to eight shots and then police pointing a gun at a man kneeling on the pavement.

"I saw a lot of blood over there. A lot of people on the ground," Yi said.

His passenger, Dmitry Metlitsky, said he also saw police standing near a man who was on his knees with his hands up, and another man bleeding on the ground nearby. He said the truck had also collided with a small school bus and one other vehicle.