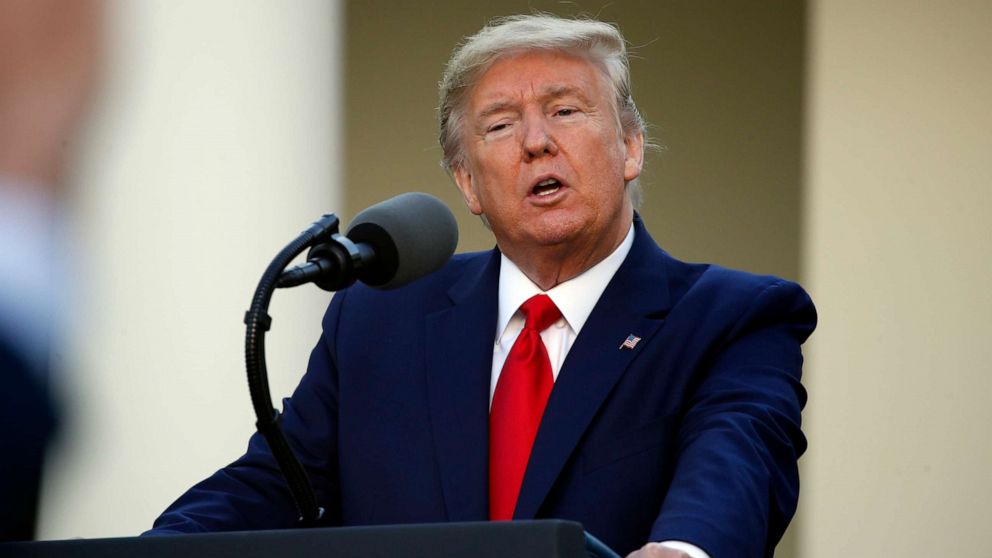 President Donald Trump and his coronavirus task force geared up on Tuesday to explain the sobering data that drove the decision to extend federal recommendations to blunt the spread of coronavirus until the end of April.

His health health experts advised him 100,000 to 200,000 people could die even if the restrictions remained in place.

At the same time, they said, models predicted that heavy death toll would still be significantly lower than the 2.2 million estimated without mitigation efforts.

Trump on Tuesday also alluded to possibly providing some changes to the federal guidelines aimed at slowing the spread of the novel coronavirus, which he initially implemented for a 15-day period set to run out early this week.

The president said Monday said the recommendations would remain "very much as they are" but that they "may be even toughened up a little bit." Across the country, governors and local officials have enacted their own social distancing rules, often mandatory and enforceable, unlike the federal ones.

Trump said Sunday that, on Tuesday, he would explain the extension by sharing "all of the findings, all of the data, and the reasons we're doing things the way we're doing them."

The White House has declined to elaborate on how the guidelines could be toughened as the president teased. Trump was expected to address reporters at a scheduled briefing by his coronavirus task force scheduled for 5 p.m.

Dr. Deborah Birx, the White House's coronavirus response coordinator, told reporters Monday that the White House conducted its own modeling -- and consulted a dozen other models -- to make its decision.

The White House "ended up at the same numbers" as did the Institute for Health Metrics and Evaluation at the University of Washington, Birx said. Assuming social distancing policies stay in place, that model predicts a nationwide peak on April 15, with a projected 84,000 deaths from the pandemic's first wave.

She said that some models predicted that, without any mitigation, up to half of the United States population would become infected and up to 2.2 million would die.

"There'll be a comprehensive piece presented on Tuesday that really talks about not only diagnosing individuals, but also increasing our surveillance now that we have more test kits so that we can really stop and contain new infections," Birx said.

The update on the federal guidance comes as President Trump has publicly expressed openness to broadening out the federal government's recommendations on the use of face masks and coverings by the general public.

"I could see something like that happening for a period of time. But I would hope it would be a very limited period of time," Trump said Monday when about the idea that everyone should wear a mask in public but suggested the idea had not been discussed at length.

Dr. Anthony Fauci, the nation's foremost expert on infectious diseases and a member of the president's task force, confirmed Tuesday that the administration was actively discussing a recommendation for wide use of face masks or coverings.

"The idea of getting a much more broad, community-wide use of masks outside of the health care setting is under very active discussion at the task force," Fauci said in an interview with CNN.

He then qualified: "We're not there yet, but I think we're close to coming to some determination."

Both the World Health Organization and U.S. Centers for Disease Control and Prevention have repeatedly said only health care workers and infected people should wear face masks.

The administration has previously moved to actively discourage members of the general public from purchasing certain high-grade masks, such as N-95 respirators, in order to keep the limited supplies available for health care workers in desperate need of protective gear that has been running in short supply.

"Seriously people - STOP BUYING MASKS!" the U.S. surgeon general, Jerome Adams, tweeted late last month. "They are NOT effective in preventing general public from catching #Coronavirus, but if healthcare providers can't get them to care for sick patients, it puts them and our communities at risk!"

Fauci on Tuesday acknowledged that making sure the mask supply chains remain secure to meet the demands of healthcare workers is a top priority as the administration weigh expanding guidance on face coverings for general use.

"When we get in a situation where we have enough masks, I believe there will be some very serious consideration about more broadening this recommendation of using masks," Fauci said.