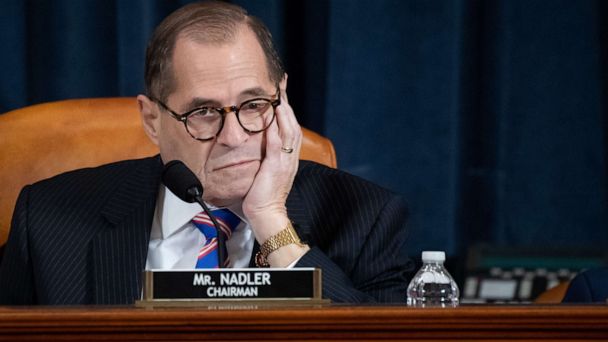 The White House sent a letter to House Judiciary Chairman Jerrold Nadler Friday afternoon blasting the Democrats' impeachment inquiry, and while it doesn't say explicitly that President Donald Trump and his lawyers will not participate in their upcoming proceedings, a senior White House official told ABC News the point of the letter is that they won't take part.

"House Democrats have wasted enough of America's time with this charade," White House counsel Pat Cipollone wrote. "You should end this inquiry now and not waste even more time with additional hearings."

"Adopting articles of impeachment would be a reckless abuse of power by House Democrats, and would constitute the most unjust, highly partisan, and unconstitutional attempt at impeachment in our Nation's history," he said.

"We don't see any reason to participate because the process is unfair. Speaker Pelosi had already announced the predetermined result. They will not give us the ability to call any witnesses," a senior administration official told ABC News.

In a letter last week, Nadler asked the president to notify the committee by Friday at 5 p.m. whether his lawyers would participate in any of their proceedings and whether they plan to present a defense. The Judiciary Committee announced a hearing on Monday in which lawyers for the Democrats and Republicans from the House Judiciary and Intelligence Committee's will present findings from the investigations.

The absence of White House participation follows weeks of vocal protests from the president and Republicans in Congress, who have accused Democrats of blocking their due process rights. In a previous letter to Nadler, the White House argued it could not be expected to participate in the hearing with constitutional scholars because the committee provided them little information about it. The White House said it would consider participating in upcoming proceedings if the committee conducted a "fair process going forward."

However, the White House is preparing an aggressive defense of the president for a Senate trial if and when the House sends over articles of impeachment.

"The underlying impeachment rules of the Senate afford the president a full suite of rights to argue his case on the facts and on the merits," Eric Ueland, legislative affairs director for the White House, told reporters. "That's why we believe quite strongly that in order to make the president's whole case, in contradiction to a partisan process which doesn't allow him to make his full case, that we need both a full trial and the opportunity to call witnesses and work a trial over here on the Senate floor."

House Speaker Nancy Pelosi announced on Thursday she had instructed House Democrats to draw up articles of impeachment of Trump, saying he'd abused his power.

"Sadly, but with confidence and humility ... today I am asking our chairmen to proceed with articles of impeachment," she said. "The facts are uncontested. The president abused his power for his own personal political benefit at the expense of our national security by withholding military aid and a crucial Oval Office meeting in exchange for an announcement of an investigation into his political rival."

Articles of impeachment could be drafted and introduced next week. That will set up a public committee hearing to mark up and approve the articles, sending them to the House floor. That could happen as early as the week after the Monday hearing.

Democrats are still on track to vote and pass articles of impeachment out of the House the week before Christmas.
Report a correction or typo
Related topics:
abc newsnational
Copyright © 2021 ABC News Internet Ventures.
More Videos
From CNN Newsource affiliates
TOP STORIES