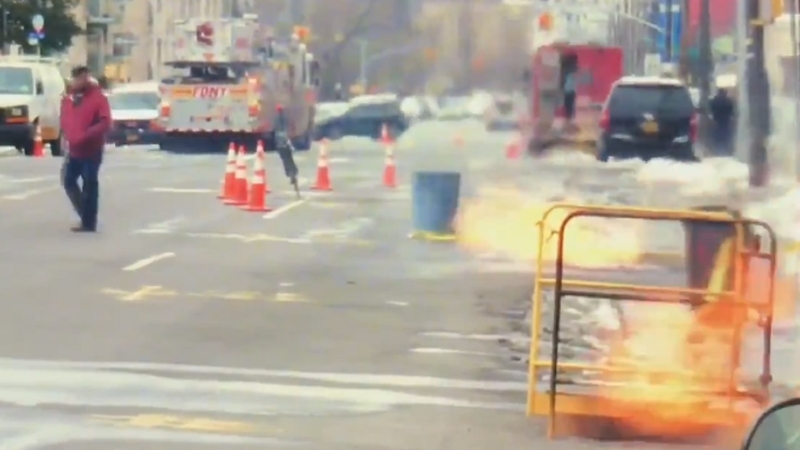 EAST FLATBUSH, Brooklyn (WABC) -- More than 12 hours after flames shot up from under the street, several blocks in East Flatbush still looked like a construction site.

Witnesses say it started with manholes around 9 a.m. Saturday on Remsen Avenue, then stretched all the way up the power lines.

2 manhole fires on Remsen Ave. in E. Flatbush, Brooklyn knocked out power to 5 buildings, caused small gas leak. “It was arcing... like something from lord of the rings... I kinda thought we were under attack.” - witness Kenneth Bordes-Hollon who shot this video. pic.twitter.com/Vq1D10CiCj

"Big huge black flames, like black smoke going everywhere. And then it like calmed down, and that's been going on for like three hours at first in the morning. And then after that a second manhole caught fire," said Kenneth Bordes-Hollon.

Then, on Remsen Avenue and East 55th Street, it got really strange.

"It's crazy. It was arcing. It was like something from Lord of the Rings," said Bordes-Hollon,

Bordes-Hollon says the fire spread throughout the power lines, and then to a pole - the whole thing caught fire. That is when the power to his house went out.

Con Edison says it was an electrical fire. Five buildings in all had power knocked out. Power is expected to be restored by Sunday morning.

The fire also melted plastic around gas lines. Twelve homes are currently without gas. Three people were also evacuated due to a small gas leak.

Meanwhile on Friday in Crown Heights, three cars were wrecked by a manhole fire. And earlier this month in Boerum Hill, a manhole fire roasted two cars and knocked out power down the block.

It hasn't been a good month for manholes in Brooklyn. Meanwhile, officials say given the winter weather that is expected in the coming days, this may not be the last of it.