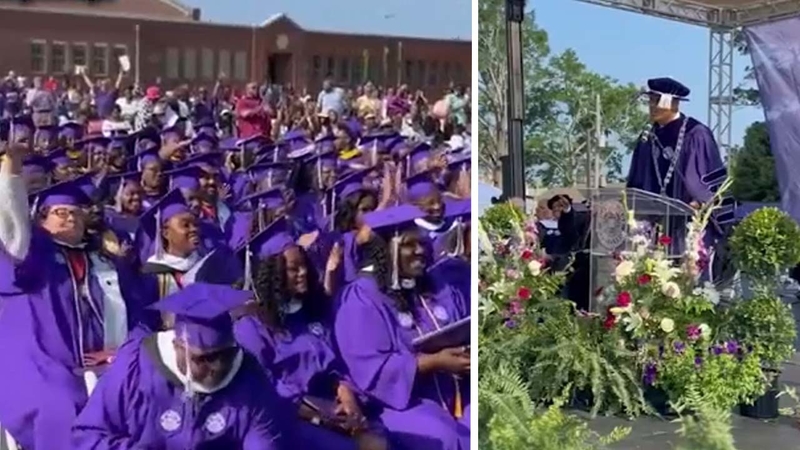 MARSHALL, Texas -- Students graduating from a historically Black college in East Texas were told at their commencement ceremony that an anonymous donor had paid their balances, officials said.

Wiley College said in a news release that over 100 students were gathered for graduation Saturday when the school's president made the announcement.

"We are constantly communicating with donors to assist students in these ways so that they can begin their after-college experience with less debt," Herman J. Felton Jr., Wiley's president and CEO, said in the news release.

The college said in the news release that the estimated total for the balances owed to the college by the graduating class of 2022 was about $300,000.

The 2007 movie "The Great Debaters" starring Denzel Washington was inspired by debate in 1935 in which Wiley prevailed over the University of Southern California's nationally-known, powerhouse team at a time when the nation was heavily segregated.
Report a correction or typo
Related topics:
educationtexaseducationtexas newsmoneyschoolcollegedonationsstudents
Copyright © 2022 by The Associated Press. All Rights Reserved.
COLLEGE
Hofstra pitcher defies the odds to help his team
NCAA clarifies NIL student-athlete pay rule to target boosters
South suburban sculpture park voted best in the US
Newark pilot program sending 40 at-risk students to college for free
TOP STORIES
Thunderstorm warnings, watches as severe weather nears
NYC expected to elevate to 'high' COVID alert level in coming days
Elementary student brings loaded gun to school in NJ
Alleged gunman in Buffalo shooting asked to leave store day before
Family of Buffalo victim with NJ ties to seek legal action
What is white replacement theory? Belief fueling racist attacks
Show More
What we know about the victims of the Buffalo shooting
Police: Buffalo gunman had plans to keep killing if he got away
AccuWeather Alert: Gusty storms
Shelton teen fatally stabbed, 3 others injured outside home
2 killed in fiery crash in the Bronx
More TOP STORIES News