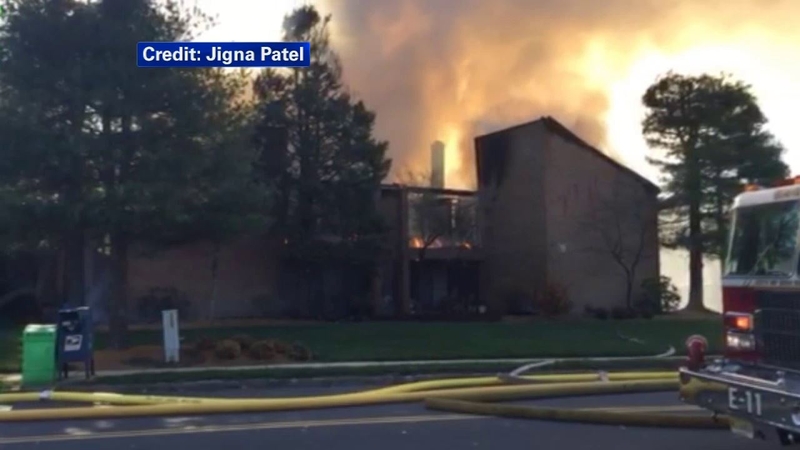 It started in an apartment complex on Willowbrook Drive in North Brunswick around 8:15 a.m. and quickly spread, consuming eight apartments.

Resident Natalia Wahad had no choice but to drop her 10-month-old baby off a second-floor balcony to a police officer below, and then jump to safety herself.

"A policeman and some other man came over, and I just dropped baby in his hands," she said. "And I jump also in their hands, and that's how we got saved."

But Wahad is crushed, because she lost her cat and the family dog, Mozart, when the pets could not escape the flames.

Neighbors opened their doors to residents fleeing with just the clothes on their backs.

"A lot of people were outside screaming and running and getting in their cars," Taji-Shaya Jacobs said. "So it was just really bad."Both were transported to the hospital as a precaution.

According to firefighters, the wood-frame complex was fully involved when they arrived on scene, and neighbors called 911 and were knocking on doors to make sure everyone got out safely.

Most residents escaped on their own, but at one point, there was concern that two firefighters were trapped in the burning building.

"Everyone was accounted for," North Brunswick Fire Chief Ken Graulich said. "Initial report, as soon as we had guys on scene, we had a ceiling fell on two of our firefighters, but were not injured. They (got) out of the structure quickly. We initially went into exterior operation at that point in time. The cause of the fire at this point and time is unknown. The Fire Marshal's Office will be investigating to determine the cause."

Two firefighters were treated for minor injuries on scene, and the cause of the fire remains under investigation.