What you need to know if traveling through Monday 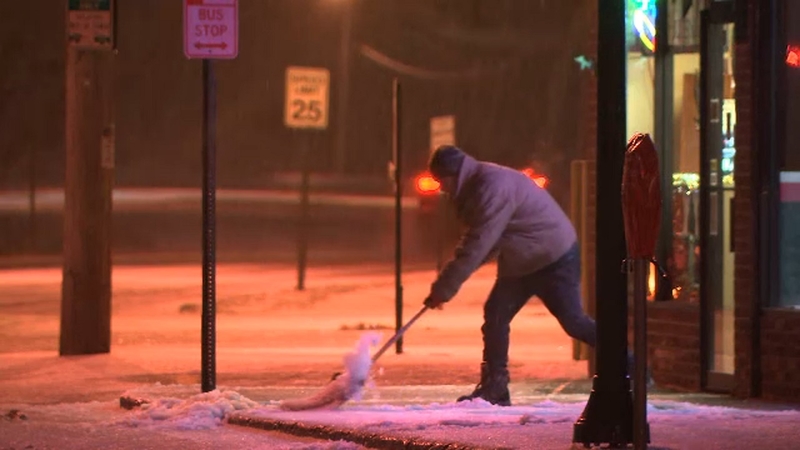 More snow on the way Monday

NEW YORK (WABC) -- A winter storm that caused treacherous conditions across much of our area on one of the busiest travel days of the year is expected to cause continued difficulty Monday.

Precipitation began Sunday in the form of a wintry mix in New York City before changing to rain, but more ice and snow north and west led to slick roads in many areas.

The powerful storm made its way east from California and is causing major disruptions around the country as people headed home after Thanksgiving.

The storm that hit much of the central U.S. with blizzard conditions Saturday is bringing snow, ice and the potential for flash flooding in a large portion of the Northeast.

The National Weather Service said travel could become impossible in some places.

Can you hear it? It’s already starting to sleet outside LaGuardia airport. Seeing hour long delays as of now @ABC7NY pic.twitter.com/Tl2KgspFeb

The weather was particularly disruptive on Sunday as millions of holiday travelers headed home. Airlines for America, the airline industry's trade group, expected 3.1 million passengers during what could be the busiest day ever recorded for American air travel.

By Sunday afternoon there were over 500 canceled flights in the US, and the FAA said some flights heading to Newark were being delayed by an average of more than 2 1/2 hours.

Bus service was cancelled out of Port Authority in New York City to Binghamton, Rochester, Buffalo, Ithaca and Syracuse.

Winter Storm Warnings are in place across the tri-state area through Tuesday.

In addition, The New Jersey Department of Transportation (NJDOT) Commissioner issued a commercial vehicle travel restriction on portions of I-78, I-80, and I-287 starting at at 12 a.m. Monday.

The restriction applies to the entire length of all Interstate Highways in New Jersey including:

The commercial vehicle travel restriction in New Jersey applies to the following vehicles: