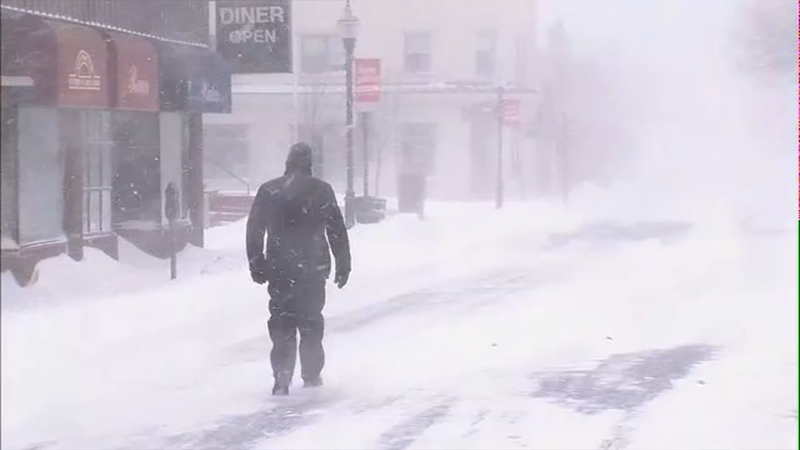 NEW YORK (WABC) -- A major nor'easter packed with powerful winds unloaded more than a foot of snow across the New York City area Thursday, bringing much of the region to a standstill.

The region has been gearing up for the storm for days, with cities and towns getting snow removal resources in place. And it didn't disappoint, prompting school closures, mass transit delays, flight cancellations and treacherous driving conditions.

The storm prompted states of emergency to be issued for parts of New York, New Jersey and Connecticut, as officials warned people to stay off the roads.

Mayor Bill de Blasio issued a snow emergency for the city, and the New York City Emergency Management Department issued a hazardous travel advisory. Alternate side parking regulations were suspended for Thursday and Friday to facilitate snow removal, though payment at parking meters remain in effect. Public schools were closed Thursday, but they will reopen Friday.


New York Governor Andrew Cuomo declared a state of emergency for the entire downstate region of the state, from Westchester south and Long Island. His office said Cuomo will not be shutting down the Long Island Expressway, but no one should be driving in Suffolk County, because of extremely poor visibility.

New Jersey Governor Chris Christie declared a state of emergency in Cape May, Atlantic, Ocean and Monmouth counties. All state offices were closed and only essential employees had to report. The governor urged people to stay off the roads and stay sheltered and warm.

In Connecticut, Governor Dan Malloy urged motorists to stay off the roads unless absolutely necessary.

It is strongly recommended that #CT motorists stay off the roads unless absolutely necessary in order to allow #CTDOT crews to clear highways as efficiently and safely as possible. Employers that can allow people to work from home or alter their hours are encouraged to do so.

The storm left tens of thousands of customers without power across the region, and led to hundreds of crashes on slick roads.

Mass transit also suffered some delays and cancellations throughout the region. NYC Ferry service was stopped early afternoon due to blizzard conditions and gale force winds. Two of the three New York City area airports -- JFK and LaGuardia -- were shut down due to the snow. LaGuardia has since reopened. JFK is set to resume flights at 7 a.m. Friday.

RELATED: 7 things to do to protect your home during the winter

The snow piled up as the monster storm moved up the East Coast, leaving more than a foot in hard-hit areas like Long Island. No part of the region seemed to be spared, though. Even NYC had more than a half foot in many parts. Click here to see the list of snow totals.

As the morning went on, the wind intensified throughout New York City:
EMBED More News Videos

Jeff Smith has a look at the treacherous conditions on the Upper West Side.

All eyes now are on the frigid cold temperatures that are following the storm. Check out the latest AccuWeather forecast here.

RELATED: Tips on staying cold, warm amid the arctic blast