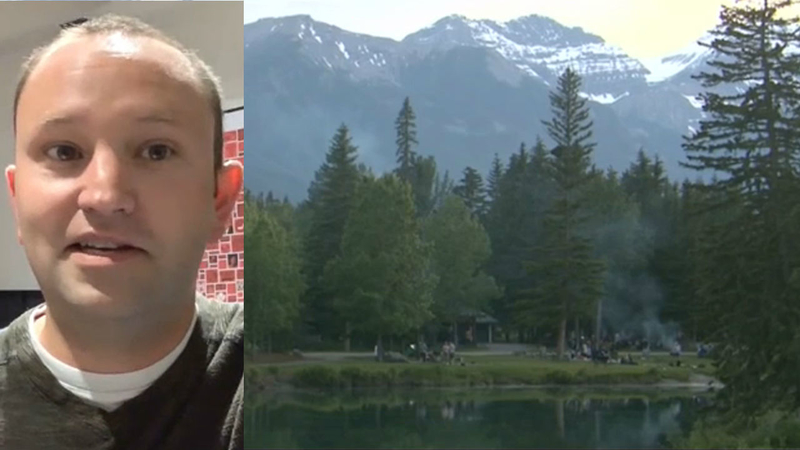 BANFF, Alberta (WABC) -- A couple from New Jersey and their two children survived a wolf attack in the Canadian wilderness thanks to the help of a stranger.

The incident happened at Banff National Park in Alberta around 1 a.m. Friday.

Elisa Rispoli, her husband Matthew and their two boys were in their tent when a wolf burst in.

Matthew stood in front of his family and began to fight the animal when the wolf clamped onto his arm and started to drag him away.

Russ Fee was nearby and heard the couple's screams and ran over.

He saw the family's tent in shambles and the rear end of the wolf sticking out.

"I kept my momentum going and I kicked it in the back half kinda like I was trying to kick in a door which I've never really done before," Fee said. "So the wolf popped out a little curious I think, maybe just didn't see that coming."

Elisa said her husband laid on top of their two young sons to protect them. The wolf tried to drag him away but Elisa held onto his legs to keep him inside.

"I cannot and don't think I'll ever be able to properly describe the terror," she wrote on Facebook.

Fee said he didn't know what the wolf would do. So he and Matthew threw rocks at it until it ran away.

The parks department released a statement on the unusual incident:

"Veterinary tests have confirmed that the wolf was in poor condition and likely nearing the end of its natural lifespan."

"I was just trying to assess how much trouble I was in, I wasn't too sure if it was going to come at me or not but it wasn't snarling, it wasn't growling at me at all," Fee said.

The Rispoli family says Fee is their guardian angel.

The wolf was euthanized and Matthew is recovering at a hospital. He says he will be back one day, but next time it will be in a camper van instead.