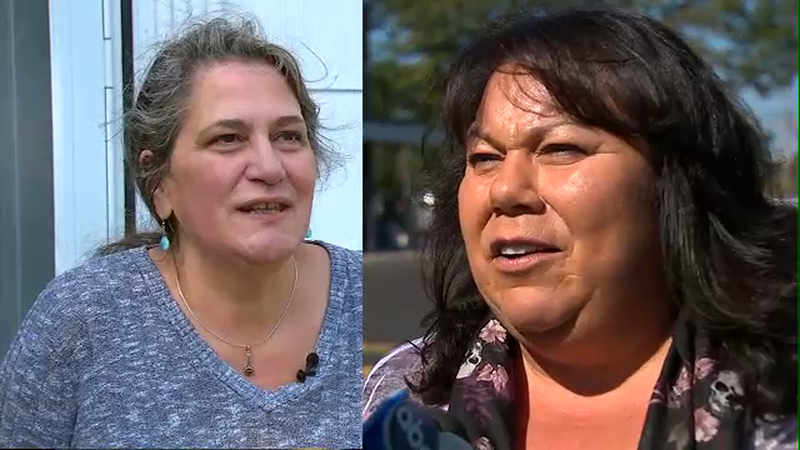 HOWELL TOWNSHIP, New Jersey (WABC) -- A New Jersey woman was saved by another woman she'd never met when she took a hard fall at a grocery store.

Now, thanks to a local Facebook page, the two have been reunited.

Marianne LaPlante only remembers bits and pieces before she suddenly collapsed inside a Howell supermarket Oct. 12.

"I looked at my mother and said I don't feel good and it wasn't a dizzy feeling, it was like something is wrong feeling," said LaPlante.

However her 93-year-old mother Ann Zigmund recalls every chilling detail...

"I started to yell help as loud as I could and then a woman came," she said.

Hearing those shrill cries for help, Lisa Manoy immediately rushed over to LaPlante, who had a deep gash on the back of her head and appeared to be having a seizure.

"I was checking her vitals and it was very weak," said Manoy. "She was going in and out of consciousness and she really didn't know what was going on."

With 15 years prior experience as a nurse, Manoy says instincts kicked in as she began performing critical rounds of CPR.

"It's a matter of life and death and it's only minutes, you only have minutes when somebody goes down like that," she said.

LaPlante next woke up in the hospital, and the only thing she could think about was the stranger who saved her life. Desperate to find that woman to thank her, she wrote a Facebook post hoping the message would somehow find her.

"This person gave me my life back," said LaPlante. "I have so much to live for, I have such a good life."

Manoy's daughter noticed the post on a town forum, and the two women exchanged phone numbers. They have since become fast friends, forever bound by fate and faith in humanity.

"The overwhelming thank yous and you're a hero, you're an angel, but I don't feel like that," said Manoy.

"She's the type of person that I can be friends with you, just know, just a really good thing," said LaPlante.