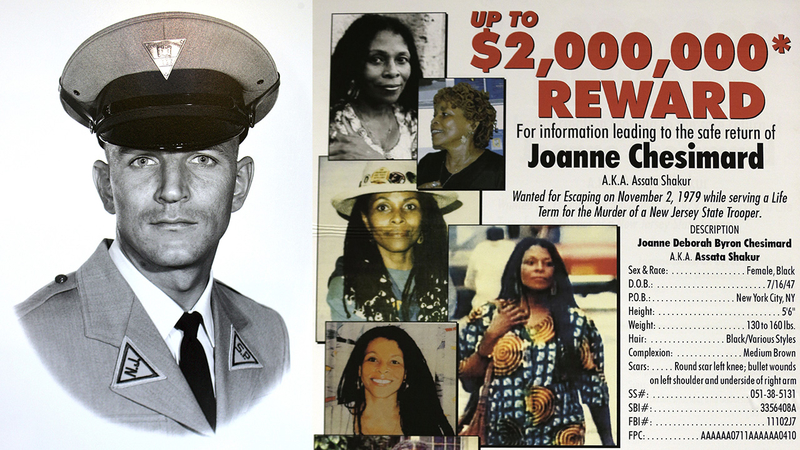 EWING, New Jersey (WABC) -- The FBI and New Jersey State Police on Thursday marked 46 years since a state trooper was fatally shot, and the suspect remains a fugitive to this day.

Joanne Chesimard fled to Cuba -- where she remains to this day -- with a $2 million bounty for the return of the Black Liberation Army member.

"She is a domestic terrorist and a convicted killer," New Jersey State Police Colonel Patrick Callahan said. "That's the truth."

In 1973, Chesimard was involved in a violent shootout during a traffic stop that killed Trooper Werner Foerster.

"She was found guilty of this crime, a crime based on my 28 years in law enforcement was a heinous execution of a law officer," FBI Special Agent in Charge Gregory Ehrie said.

Chesimard was sentenced for murder, but in 1979, she escaped from prison and fled to Cuba. She was granted asylum and lives under the alias Assata Shakur.

While federal authorities have worked with Cuban officials on other criminal cases and there has been a thawing of relations with Cuban leaders, Chesimard's return is not imminent.

"We are looking to return her under an FBI warrant for unlawful flight to complete her sentence," Ehrie said. "There appears to be a mythology built around Chesimard that she is in some way a political activist or an influencer, and that's more a state department issue to agree with and arrange her return."

The FBI and NJSP would just like to see the fugitive returned to justice.

Decades have past, but the wounds are still fresh for the Foerster family.

"It is still raw and painful for them today, some 46 years later," Callahan said. "So that's why we are here to make sure that we do everything we can to have her serve out her sentence."