Woman has surgery after dreaming she swallowed ring, waking up to discover she actually did 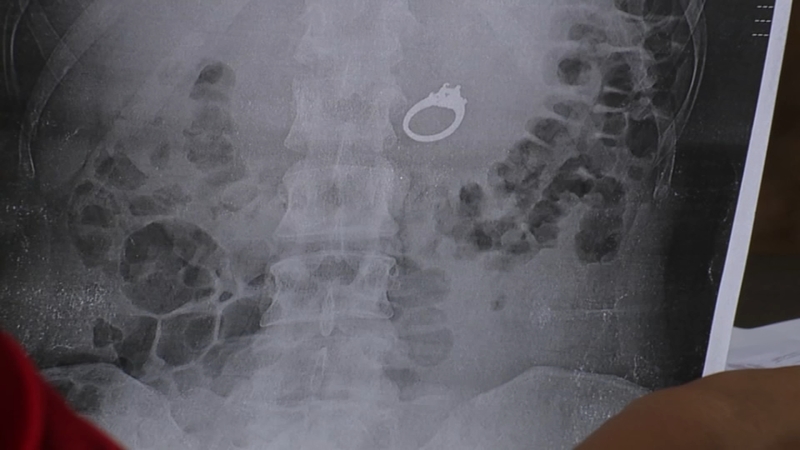 Woman swallows engagement ring after dreaming she swallowed it, had surgery to recover ring

SAN DIEGO -- A San Diego woman had surgery after dreaming she was forced to eat her engagement ring and waking up to discover that she had actually eaten it.

Jenna Evans was deep asleep on Tuesday night when she dreamed that she and her fiancé, Bobby, were on a high-speed train facing off with "bad guys" and during the fight Bobby told her she had to swallow her engagement ring to protect it from them, she told ABC San Diego affiliate station KGTV.

When she woke up, however, she saw that the ring was gone and immediately knew what had happened.

"I had to wake Bobby up and say, 'I did something really stupid last night,'" Evans said. "When I woke up and it was not on my hand, I knew exactly where it was: it was in my stomach."

Evans and her fiancé's fears were confirmed after she got an X-ray at Urgent Care. The silhouette of the ring was clearly there right in the middle of her stomach.

Things took a turn when she could feel the ring in her stomach and it started becoming painful for her.

So, rather than let the ring pass through her body naturally, the doctor suggested that the safest way to retrieve her engagement ring would be to have an upper endoscopy to remove it.

"I was really happy because I don't know if I can look at it and appreciate it in the same way, if I had to search for it," Evans said to KGTV. In other words, if she had to let nature take its course.

The procedure went smoothly and doctors were able to remove the ring from her intestines.

Even after everything she has been through, Evans is thrilled to have her ring back.

"I feel very grateful that I got it back, and that this is a happy and funny story," Evans said.

Jenna and Bobby's nuptials are still on course to take place in her home state of Texas next May but with one difference in the preparations now: She takes the ring off before she goes to sleep.