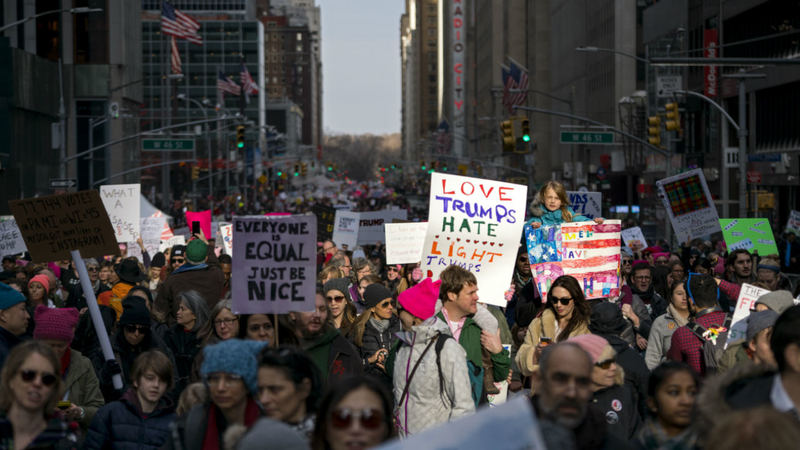 NEW YORK CITY (WABC) -- The Women's March returned to Washington DC and around the nation Saturday and found itself coping with an ideological split and an abbreviated route due to the government shutdown.

Activists united to make their voices heard as marches took place in Phoenix, St. Louis, St. Paul, Toronto, and in dozens of other cities.


A schism over concerns related to race and religion triggered dueling women's marches in New York City. One procession began at Columbus Circle and traveled down Sixth Avenue, organized by the Women's March Alliance.

They splintered this year with Women's March, Inc, which held its rally at Foley Square in Lower Manhattan.

In November, Teresa Shook, one of the movement's founders, accused the four main leaders of the national march organization of anti-Semitism. The accusation was leveled at two primary leaders: Linda Sarsour, a Palestinian-American who has criticized Israeli policy, and Tamika Mallory, who has maintained an association with Nation of Islam leader Louis Farrakhan.

Mallory appeared on "The View" this week to defend her praise for Farrakhan.

The event was briefly delayed by activist Laura Loomer, who co-opted the podium to declare the movement's backers "the real Nazi march." She interrupted Women's March NYC director Agunda Okeyo as she was making opening remarks at the rally near a cluster of courthouses in lower Manhattan.

She continued ranting as security ushered her from the stage, screaming, "What about the Jews?"

Loomer's past protest stunts have included handcuffing herself to a Twitter office after the service banned her and jumping a fence at a home owned by House Speaker Nancy Pelosi with several men she described as immigrants in the country without legal documentation.

Okeyo, who rejects that the movement is anti-Semitic, responded to the interruption by welcoming Jews and reminding the crowd about the purpose of the rally.

"This is not a negative day," Okeyo said. "You're not coming with that. We're not doing that today. What we're doing today is we're going to uplift each other and we're going to make sure we stay positive."