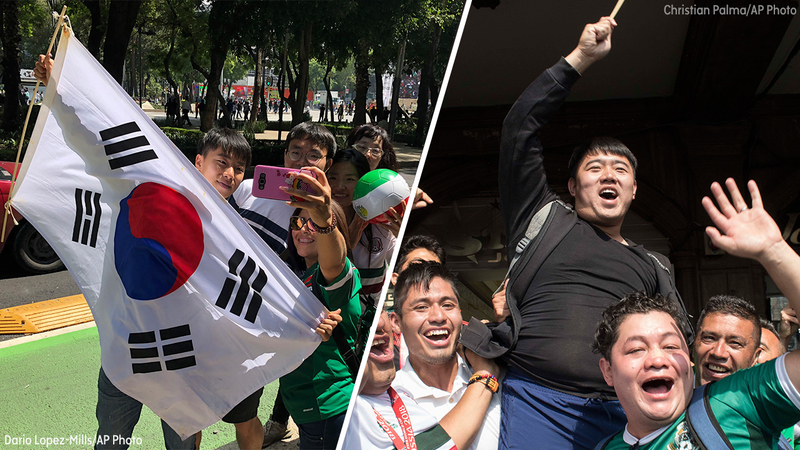 YEKATERINBURG, Russia -- Mexican soccer fans around the world were celebrating with Korean fans after South Korea's upset of Germany helped Mexico advance to the knockout stage of the World Cup.

The mood was somber following Mexico's 3-0 loss to Sweden. El Tri was on the brink of elimination if Germany had beaten South Korea.

Following their match against Sweden, Mexico's faithful turned their attention to the end of South Korea's game in Kazan.

In a wide open Group F, all they could hope was an upset result in the other match featuring defending champion Germany against South Korea. Mexico fans were hoping for a shocking upset - and the South Koreans delivered that with two goals in stoppage time for a 2-0 victory.

That result sent the Mexican squad into the knockout round along with Sweden, despite their loss on Wednesday.

"We advanced to second phase, and thanks to Korea!" said Mexico City resident Edmundo Robert, who was at the game with his son and father-in-law. "Yes, it was sweet. A victory is sweet - and this is a kind of a strange victory."

Groups of Mexicans were still chanting "Korea, Korea," as they left the arena.

Mexican fans arrived at the South Korean embassy in Mexico City to chant: “Korea, brother, you are now Mexican” (it rhymes in Spanish)

Jose Alcocer was jumping with friends in a circle long after the match, chanting: "Bye-bye Germany."

In honor of Korea, I had to put this Korean man on my shoulders to celebrate 🇰🇷 pic.twitter.com/A8mNVH3DuE

Mexico has reached the round of 16 for the seventh straight World Cup, but this one will long be remembered.

This Korean man is the most popular man at Plaza Mexico. People are rushing to pose for pictures with him. #WorldCup pic.twitter.com/IbX3tCfdz1

"I never felt such happiness," said Carlos Preciado, a Mexican who lives in San Francisco." I cannot explain this happiness that exploded in one second. I never felt like that. Honestly, it was the best celebration of a Korean goal. It was the best thing, we just passed to the next round, and the World Cup champion is out."

Germany became the fourth defending champion in the last five tournaments to be eliminated in the group stage, finishing with a one win - in stoppage time against Sweden - and losses to Mexico and South Korea.

Mexico next faces the winner of Group E and, Alcocer concedes, "We have to more careful about everything."