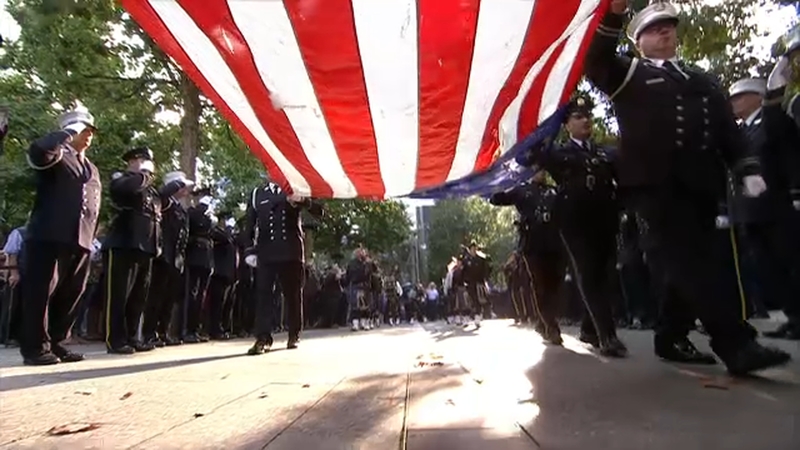 NEW YORK (WABC) -- New York City and millions around the country are commemorating 9/11 with mournful ceremonies, volunteering, appeals to "never forget," and drawing attention to the terror attacks' continued toll on responders.

A crowd of victims' relatives descended on ground zero in Lower Manhattan Wednesday, while President Donald Trump joined an observance at the Pentagon and Vice President Mike Pence spoke at the third attack site near Shanksville, Pennsylvania.

The events of that terrible day and the weeks, months and years that followed are never forgotten, nor are the memories of those killed by terrorists in hijacked planes. Additionally, we remember all those who have died from 9/11-related illnesses from their heroic work at ground zero and those who suffer today.

The victims' names were again read aloud at the ground zero ceremony, where moments of silence and tolling bells mark the moments when the aircraft crashed and the trade center's twin towers fell.
EMBED More News Videos

Josh Einiger reports on the events marking the 18th anniversary of 9/11.

September 11 still shapes American policy, politics and everyday experiences in places from airports to office buildings, even if it's less of a constant presence in the public consciousness after 18 years.

"As long as the city will gift us this moment, I will be here," Margie Miller, who lost her husband, Joel, said at the ceremony, which she attends every year. "I want people to remember."

On Demand: The full reading of the names ceremony

After so many years of anniversaries, she has come to know other victims' relatives and to appreciate being with them.

"There's smiles in between the tears that say we didn't do this journey on our own, that we were here for each other," she said.

Related: Bill Ritter reflects on the 18th anniversary of 9/11

Beginning this year, there will be a moment of silence at all public schools in New York state to mark the 9/11 anniversary, under a new bill signed into law.

Given that most students today were born after the attacks, the bill's sponsors hope that by pausing to reflect, future generations will never forget

"I think it's important for our state to do, and the feedback has been very positive," State Senator Joseph Addabbo, Jr., said.

President Trump laid a wreath during a ceremony at the Pentagon.

"This is your anniversary of personal and permanent loss," he said. "It's the day that has replayed in your memory a thousand times over. The last kiss. The last phone call. The last time hearing those precious words, 'I love you.'"

Pence spoke at the commemoration of the Flight 93, crediting the crew and passengers who fought back against hijackers with protecting the U.S.

"I will always believe that I and many others in our nation's capital were able to go home that day and hug our families because of the courage and selflessness of your families," said Pence, who was an Indiana congressman at the time.

The Flight 93 National Memorial marks the site near Shanksville where the plane went down at 10:03 a.m., after passengers fought back. Officials concluded the attackers had aimed the Boeing 757 toward Washington, D.C.

For families like Mary Ann Marino's, "18 years has not lessened our loss," she told those gathered at ground zero after she read part of the long list of victims' names. She lost her son, firefighter Kenneth Marino.

Parboti Parbhu choked up as she spoke from the podium about her slain sister, Hardai. Even after nearly two decades, "There's no easy way to say goodbye," she said.

By now, the heritage of grief has been handed down to a new generation, including children and young adults who knew their lost relatives barely or not at all.

Jacob Campbell was 10 months old when his mother, Jill Maurer-Campbell, died on 9/11.

"It's interesting growing up in a generation that doesn't really remember it. I feel a connection that no one I go to school with can really understand," said Campbell, who is now a University of Michigan sophomore."

September 11 has become known also as a day of service, with people around the country volunteering at food banks, schools, home-building projects, park cleanups and other charitable endeavors on and near the anniversary.