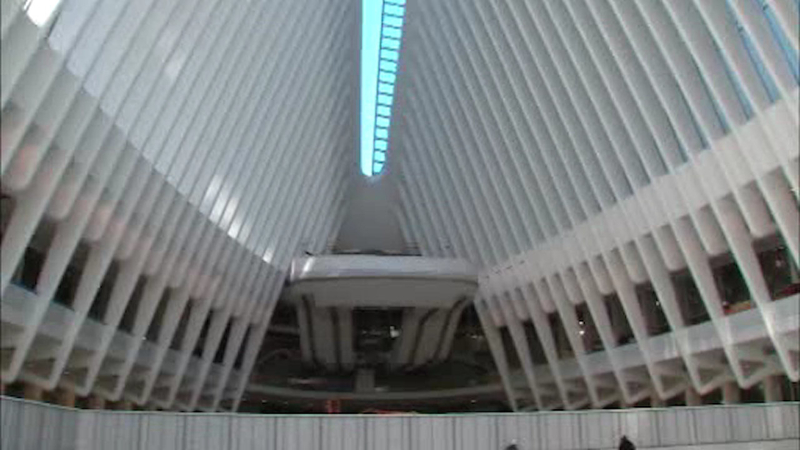 LOWER MANHATTAN (WABC) -- The new World Trade Center transportation hub is officially open to the public, with New Yorkers and tourists alike getting their first look inside the so-called "Oculus."

One entrance to the station's cathedral-like pavilion opened to the public Thursday.

The station, which replaces one destroyed in the 9/11 attacks, was designed in 2004 by Santiago Calatrava and cost $3.9 billion. It was originally budgeted at $2 billion.

Ground wasn't broken on the new World Trade Center Transportation Hub and Shopping Center until 2010, and the construction took a decade.

Cost overruns have been blamed on the architect's demands and the logistical complexity of building it while the September 11 memorial and office towers were also under construction.

People can enter through 4 World Trade or at Liberty Street, and a passage way leads to the Oculus. Or it can be accessed by those coming up from the PATH train. But there is still much that needs to open, including 75,000 square feet of food and retail, complete with an Apple Store, and additional ways in and out to accommodate all the anticipated foot traffic.

The hub is airy, white and peaceful with a skylight, and it is considered a way to honor those who died in the 9/11 attacks. The design has so far been met with mixed reviews.

Another entrance at Church Street that will provide a link to the subways is expected to open in two to three weeks, and The Port Authority of New York and New Jersey says it will hold a ceremony this spring when all the entrances to the station are open.
Related topics:
trafficnew york cityworld trade centersubwaypath
Copyright © 2021 WABC-TV. All Rights Reserved.
TOP STORIES
Child among 3 injured after floor collapses at Bronx salon
Man seen wandering NYCHA hallway with what appears to be a sword
Man stabbed in the eye, has bag stolen in Midtown
Chris Cuomo was accused of harassment days before CNN firing
Bob Dole, longtime public servant and WWII veteran, dies
Lincoln Center annual Christmas tree lighting takes place Monday
Parents knowingly sent child with COVID to class, prompting quarantine
Show More
AccuWeather Alert: Windy and warmer with showers
Tri-State omicron case count up to 10 as hospitals strain
COVID outbreak on cruise ship approaching New Orleans
Homeowner told to take down 'Christmas Vacation' display or face fines
Man says he helped parents of accused Michigan school shooter
More TOP STORIES News