Yacht race held around Manhattan to raise money for charity 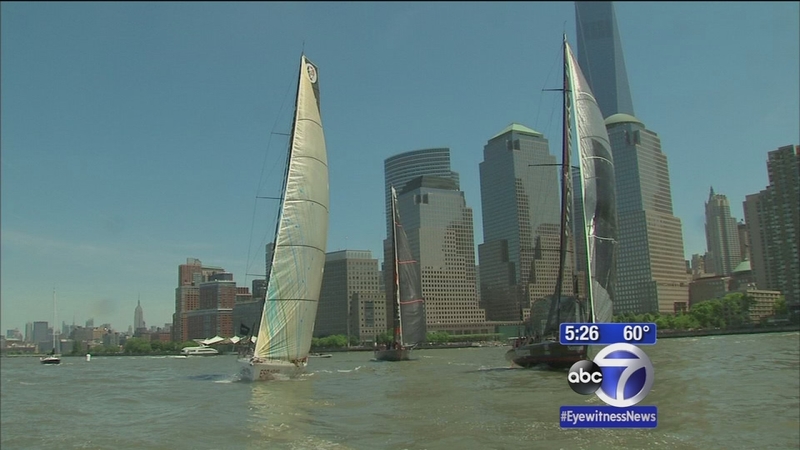 NEW YORK (WABC) -- A race around Manhattan on a yacht was all for a good cause, and it's leading up to a much bigger and longer race that will go all the way to Barcelona.

World class sailors competed Thursday in the Hugo Boss Charity Sailing race, under blue skies and fair weather clouds, and with temperatures in the mid-60's and a light southwest wind. Almost perfect.

"In the beginning of our race today it was a very light wind and that made it very difficult to sail properly down the river. So that's the big challenge, to just get the boat moving and keeping it moving," said Ryan Breymeir of the Alex Thompson Racing Team.

In the financial district harbor, there's an escape harbor that lets you feel like you're flying by One World Trade and Lady Liberty.

"Being out there and being one with nature, because you're really part of it, you've got water crashing over you, the wind in your face," said Breymeir.

Together the crews competed against four other teams.

"Literally flying by the Statue of Liberty, I've got the Freedom Tower behind me, it's very American," said Graham.

The prize for winning this race up and down the Hudson was money to Graham's favorite charity.

"Angel Flight is an organization that helps transport kids. For example maybe a burn victim or a kid with cancer who needs a special treatment," said Graham.

So beyond a first place finish, the best result is money is going to Angel Flight to help sick children who need transportation.

The 60 foot carbon fiber yacht is built for speed and can go 35 knots. This charity race, though, is just a warm up. On Sunday the two man crew will race from the tip of Manhattan to Barcelona!

"It's going to be a lot of work. You saw today how much work it is. It's the same thing as what we did today, but it's 14 days long," said Breymeir.

By the way, the yachts are docked right next to the Learn to Sail school... Not a bad idea for anyone ready for a high adventure!