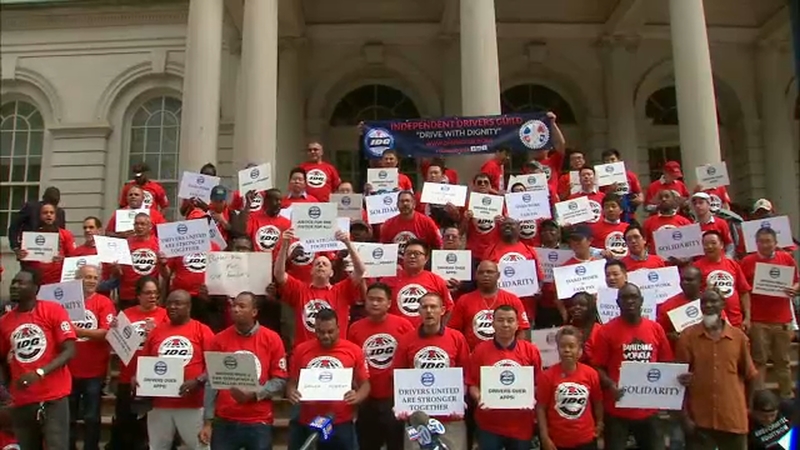 The New York Times reports the U.S. attorney's office in Manhattan is investigating the lending practices that led thousands of cab drivers to take out high-risk loans that left them buried in debt.

Drivers who took out large loans to buy the medallions that allow a person to operate a yellow taxi were crushed by debt when the value of a medallion plunged from more than $1 million in 2014 to less than $200,000 today.

More than taxi 950 medallion owners have filed for bankruptcy, and the crisis has been blamed for a string of driver suicides.

The emergence of Uber and other ride-hail services has been a major cause of the medallions' drop in value. But critics say the credit unions and other lenders that encouraged immigrant drivers with little command of English to take out risky loans are partly to blame for the crisis.

Federal prosecutors have not commented on the investigation, but two drivers told the Times they had been interviewed by federal agents as part of the probe.

"I told them everything," said driver Mohammed Hoque, an immigrant from Bangladesh who said he drove six days a week, 12 hours a day, but still fell behind on his payments.

Taxi industry leaders -- including the lenders who provided the loans -- have denied any wrongdoing and blamed the medallion owners for taking on too much debt.

The news comes on the same day as a City Council subcommittee oversight hearing on the taxi industry. The hearing, by the council's Committee on Transportation, will hear evidence on the TLC's implementation of for-hire vehicle growth restrictions, for-hire vehicle driver pay standards, and other recent local laws.

The Guild is calling for a drivers' bill of rights.

"Driver pay is falling thousands of dollars short and the TLC has failed to act," executive director Brendan Sexton said. "Instead, the commission made matters worse with new regulations that make drivers slaves to leasing companies and a ban on rooftop ads, two steps that are taking thousands of dollars out of drivers' pockets. We are calling on City Council to step in and protect drivers with a drivers' bill of rights."

The Taxi and Limousine Commission issued the following statement:

"The TLC's Driver Pay Protection rules, which went into effect in February this year, are working. Average driver gross earnings per hour are $28, slightly higher than the target hourly rate (which represents $17.22/hour in take-home pay after driver expenses). Our most recent review of earnings data thus far puts the typical driver on track for an almost $10,000 raise this year. When we account for the fact that the average driver is doing more trips each month than last year, they are making more than $750/month in additional pay, the TLC has found. This is money that goes into drivers' local communities and boosts the NYC economy. The study the TLC commissioned last year by two prominent labor economists estimated that weekly driver pay would increase from $718 to $899 due to the pay standard. Average weekly driver pay has been in the range of $902 to $1035 between February and June 2019. Based on the data we've analyzed, we're on track to having drivers earn what we expected, and we'll know for certain after a year has passed. The TLC worked closely with Council on our landmark Driver Pay protection rules, the first of their kind, in 2018. Council supported this important work to regulate pay in the for-hire vehicle sector by passing Local Law 150."