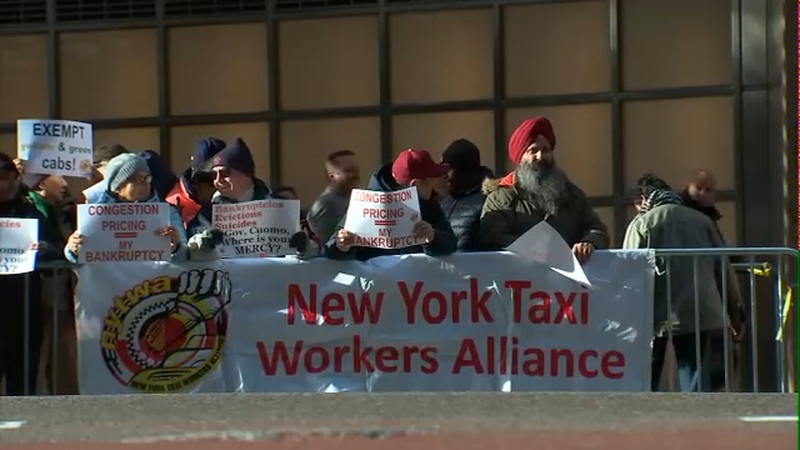 NEW YORK (WABC) -- A New York judge has temporarily blocked the state's congestion pricing surcharge on taxi and for-hire vehicles, which was set to take effect January 1, after drivers sued over the fee.

There will be a hearing on January 3 to determine whether or not to continue with the restraining order, until a final decision is made.

"We are pleased Albany's sham of a congestion tax is now temporarily suspended," Independent Drivers Guild spokesperson Moira Mintz said in a statement. "If the tax is allowed to move forward, the average New York City Uber or Lyft trip will be taxed a total of $5 starting in January ($3.30 for taxi trips). "

On Wednesday, taxi drivers rallied outside of Governor Andrew Cuomo's New York City office to call for yellow and green cabs to be exempt from the congestion pricing fee, which would impact all rides that pass through Manhattan below 96th Street.

The proposed fee is $2.50 for yellow taxis and $2.75 for green cabs and other for-hire-vehicles. Yellow taxis currently have a 50 cent surcharge on each fare that funds the MTA. The congestion fee would be additional.

The alliance noted that Uber spent more than $100,000 lobbying for this version of congestion pricing. When a passenger requests a group ride on Uber, Lyft and other app companies, even if the trip isn't matched with a second passenger, the fee would only be 75 cents.

Some of the money raised by the fee, about $400 million, would be use to fix the aging MTA subway system.

Drivers admit the system needs the money. But they say they shouldn't be the ones punished for it, especially when they say their industry is on the brink of extinction.

"Would you ever tell your kids to do this job? Um no I'd never advise them to do it," said Uber driver Saibou Sidibe. "That's why I'm trying to do my best you know. So they can get the best education and follow a path but not mine."

The New York Taxi Workers Alliance says that eight drivers have committed suicide in 2018, and city should not add more financial pressure.

"The governor took the path of least resistance, saying, 'You know what, let's put it on the yellow cab drivers, no one's going to mind,'" retired taxi driver David Pollack said. "Well we're out here today in the cold. We're calling for a delay in the legislation until something logical, an intelligent plan, can be made. It shouldn't be on the backs of drivers."