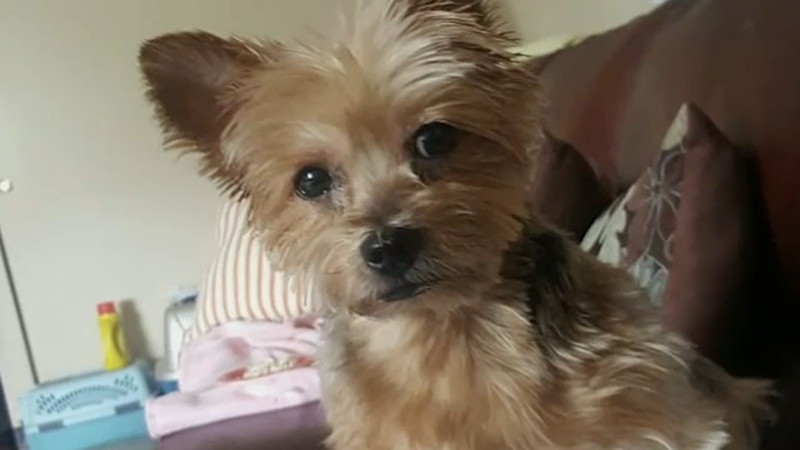 HOBOKEN, New Jersey (WABC) -- A family in New Jersey is devastated and angry after their beloved dog was killed at a dog park.

Bamf, a Yorkshire terrier, was mauled to death by a pit bull in Hoboken earlier this month.

The dog's owner, Patricia Enrico, misses her Yorkshire terrier and now says the pit bull's owners should be held responsible.

"Sweet is an understatement," Enrico said. "He followed me wherever I went."

The Church Square Park dog run was one of their frequent stops. But June 3 would be their last visit there.

"I took two steps in, turned to close the gate, and that's when it happened, in seconds," Enrico said. "His eye ball was hanging out, gushing blood."

Walkers and owners in the area are now looking out for that aggressive pit bull, which was with a dog walker that day.

"You can only image the agony of what that dog went through," a local dog walker said. "Yeah, we're definitely on the lookout."

"If you can't control your dog, you have no right and no business being in a dog run," a local dog owner said.

According to the police report, the pit bull's walker said the little dog shouldn't have been in the same area as the big dogs. But there actually are no rules or signs about what sized dog should be where, and an internal gate even connects the two sides.

Enrico maintains the dog walker should have at least warned her about the pit bull's aggressive behavior.

"I am beyond angry," Enrico said. "He didn't attempt to stop me and say, wait a minute, I'm not sure of my dogs."

She is considering a lawsuit against the pit bull's walker and owner.

The city of Hoboken is also considering designating the bigger area of the park for big dogs and allowing smaller dogs in at their owners' risk.