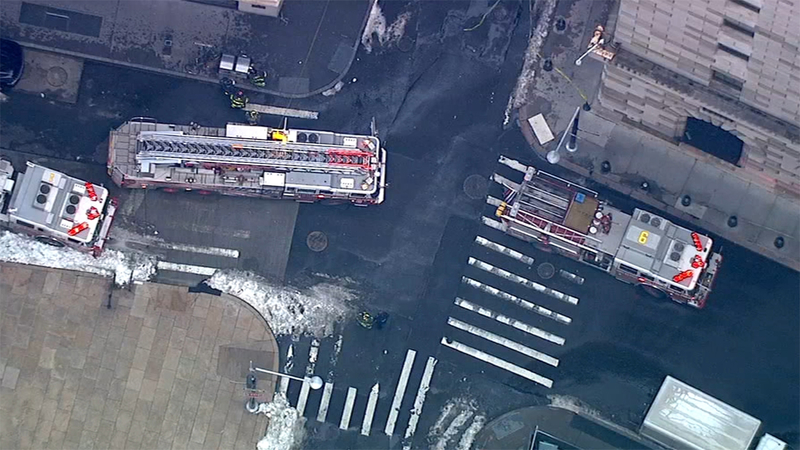 LOWER MANHATTAN (WABC) -- One man was injured and two buildings were evacuated after a pair of manhole explosions in Lower Manhattan Thursday.

The FDNY received several 911 calls at about 4:20 p.m. reporting a loud explosion with a smoke condition.

The man who was injured was downtown visiting his wife on a work break, and was parked near one of the manholes.

"The first one that blew up, went underneath the car with the gentleman in the car," said eyewitness James Rizzo. "They rushed him to the hospital. It sounded like a bomb went off."

The 38-year-old man was sitting in the driver's seat of a Hyundai when the explosion blew off part of his front bumper and trim. He suffered only a minor injury.

About a half hour later a second manhole exploded on Liberty Street.

The FDNY says a transformer vault below Nassau Street between Liberty and Maiden Lane caught fire, causing the explosions.

#FDNY is on scene of a blown transformer at 28 Liberty St in Manhattan. There are multiple buildings with high levels of CO. There is currently one non-life-threatening injury reported pic.twitter.com/j7WNdjBZDT

Some witnesses said they felt it all the way up on the 27th floor of a nearby building.

"We were sitting in our desk, we heard a loud explosion and the building shook," said Connor O'Neil.

Two buildings on Nassau Street were evacuated because of high carbon monoxide levels.

"The readings range from 0 ppm to 173 ppm.The buildings were evacuated on the basement in the first floor. Everything above the first floor and all five buildings on Nassau Street were negative," said FDNY Deputy Chief Joe Schiralli.

People in the Federal Reserve building evacuated before the FDNY arrived when the first explosion happened.

Some streets in the area were closed off as the FDNY responded and Con Ed crews arrived to make the necessary repairs. The utility says that following snowstorms, salt used to treat the streets can get underground and corrode equipment, which can spark manhole fires.

Other than the one minor injury, those who live and work in the area say they were relieved it was not as bad as it sounded.

"You assume the worst," said O'Neil. "Every time, I mean, being in New York, you always assume they could be something terrorism related and it wasn't."