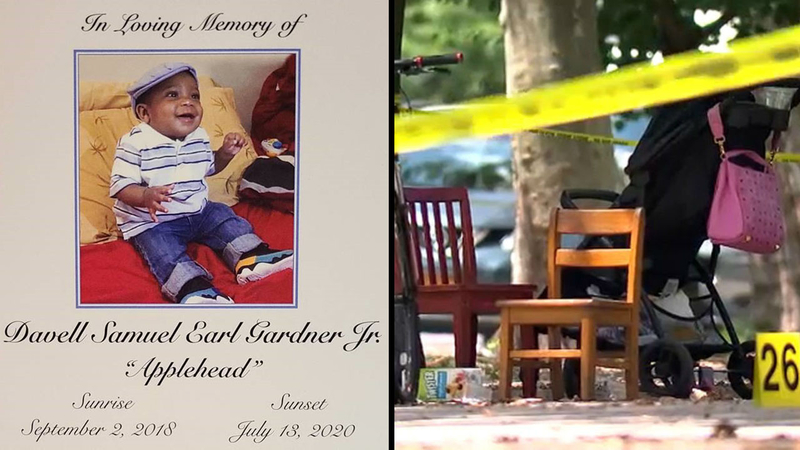 BEDFORD-STUYVESANT, Brooklyn (WABC) -- Family, friends and other mourners gathered Monday in Brooklyn to bid a final farewell to a 1-year-old boy gunned down during a cookout at a park in Bedford-Stuyvesant amid the surge in shootings across New York City.

The Rev. Al Sharpton, founder and President of National Action Network, joined the family of Davell Gardner, Jr., to deliver the eulogy at his homegoing service, held at Pleasant Grove Baptist Church.

The contrast was severe and unsettling, a brightly colored coffin the size of a child with a teddy bar on top.

A funeral was held for 1-year-old Davell Gardner, Jr. who was shot by a stray bullet in Brooklyn.

His father said his world is shattered.

"It just hurts because a piece of me has, my son is gone," he said. "I don't have nobody I can sit there and watch...calling me, 'Daddy, daddy, daddy.'"

Gardner's death comes at a time when the NYPD says shootings rose 276% compared to this time last year. Of the more than 50 shooting victims this month, 10 of them were minors.

The boy, two months shy of his second birthday, was shot near the Raymond Bush Playground at Madison Street and Marcus Garvey Boulevard around 11:30 p.m. on Sunday, July 12.

Police say two men dressed in all black opened fire on the group and then fled through the park. There were no words exchanged or dispute before the shots were fired, according to investigators.

One person suspected in the shooting is in custody and charged in another murder, but so far, no one is charged in connection with Gardner's death.