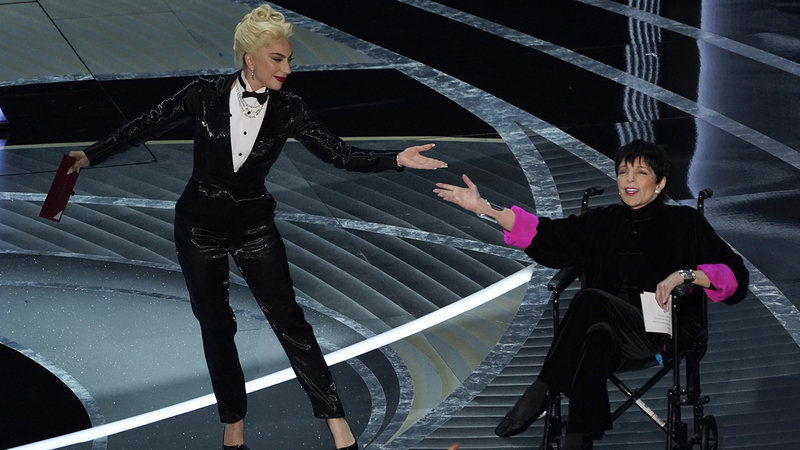 LOS ANGELES -- Although the larger conversation around the 2022 Oscars ceremony involved a particularly belligerent moment, the night ended on a sweet note: Lady Gaga and Liza Minnelli presenting the award for best picture.

While the Academy previously announced the "House of Gucci" star's Oscars attendance, Minnelli's was a surprise. The 76-year-old actress cheered and smiled from her wheelchair as the audience at the Dolby Theater applauded the duo's entrance Sunday night.

"See that? The public, they love you," Gaga told Minnelli.

"CODA" was named best picture after one of the most shocking moments in Oscars history: Will Smith slapped Chris Rock onstage. Sandy Kenyon has more on the fallout from Hollywood's biggest night.

The legendary actress's 2022 Academy Awards appearance marked the 50-year anniversary of "Cabaret." Minnelli won the best actress Oscar for her portrayal of cabaret singer Sally Bowles in the 1972 film.

As Minnelli, flustered, began shuffling her notes, her 36-year-old co-presenter assured, "I got it," and patted her back.

She then started to fumble in tossing to a pre-recorded list of best picture nominees, but Gaga again swooped in to help carry the presentation forward.

"Throughout the night, we've seen highlights of the 10 best picture, you know, nominated for best picture, awards. Now we're going to show you something else?" Minnelli said, looking at Gaga.

'We're going to tell you who the nominees are right now," Gaga added.

Amy Schumer, Wanda Sykes, Regina Hall bring the jokes during their opening trialogue at the Oscars.

Before their microphones cut out, Gaga leaned toward Minnelli and whispered, "I got you."

Back on camera, after best picture nominees were named, Gaga held the envelope containing the award announcement at Minnelli's eye level.

"OK, 'CODA,'" Minnelli read, initially without much gravitas, then perked up at the crowd's applause.

Troy Kotsur of 'Coda' wins Oscar for Actor in Supporting Role, making him the second deaf actor to win an Academy Award.

PHOTOS: Every gown worn by a best actress winner at the Oscars since 1929