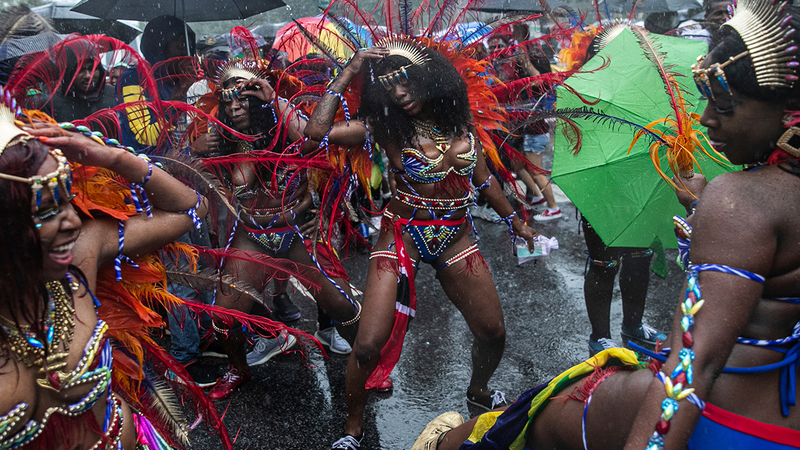 CROWN HEIGHTS, Brooklyn (WABC) -- The annual J'Ouvert celebration was held Monday morning in Brooklyn followed by the West Indian Day Parade later in the day, one of the nation's largest celebrations of Caribbean heritage.

The NYPD implemented tight security measures that were designed to curb the violence that has plagued the events in the past.

On Monday morning police said one gun was recovered during the celebration but no major incidents were reported.

The parade began in a light rain with steel bands and revelers sporting elaborate costumes, Caribbean flags and some rain ponchos as they marched and danced.

The security plan included several thousand uniformed personnel. In addition to officers on the route, response teams from the Emergency Service Unit, Strategic Response Group, Critical Response Command, and teams of officers on bicycles were staged in and around the route.

Participants and spectators were screened for weapons and alcoholic beverages at 13 secure entry points, as well as along the two-mile parade route.
EMBED More News Videos

Derick Waller reports on the start of the J'Ouvert celebration in Brooklyn.

Backpacks and other large bags were prohibited.

Police say the detail is the largest one all year long.

"There will literally be a cop everywhere doing what they do best, keeping neighborhoods safe," said NYPD Chief of Department Terence Monahan.

The J'Ouvert celebration began at 6 a.m. and continued through 11 a.m. The West Indian Day Parade officially kicked off at noon and proceeded westbound on Eastern Parkway from Ralph Avenue to Grand Army Plaza.

Spectators were permitted to enter the route following mandatory screening at the access points beginning a few hours prior to the start of J'Ouvert.

More than 300 light towers will illuminate each entry point along the parade route to increase safety and facilitate the ease of entry.

The NYPD will also be temporarily installing a significant number of cameras across the route. These cameras will provide the NYPD command staff with visuals of any emergencies that may occur and so they can monitor for any unsafe activity. The perimeter of the entire two-mile route will be secured by NYPD blocker cars, barriers, and NYC Department of Sanitation sand trucks.