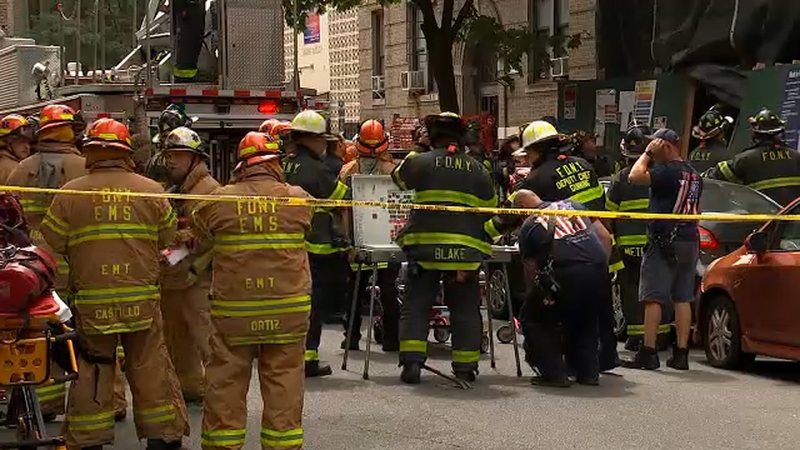 NORWOOD, The Bronx (WABC) -- A construction worker was killed and five were injured when the third story of a building pancaked down onto workers at a Bronx construction site around noon on Tuesday.

Construction was underway at a four-story apartment being built at East 208th Street near Steuben Avenue in Norwood when one of the floors collapsed onto six workers below.

For about an hour, firefighters frantically dug through concrete blocks and metal crossbeams, and some workers were pulled to safety.

The worker who died was discovered on the second floor. His body was recovered, and he was removed from the scene. He was identified as Segundo Huerta, according to sources.

One person was killed, 5 others injured in the incident

The Department of Buildings determined that an overloaded of concrete masonry blocks on the building's third floor caused the crash.

DOB issued a full stop-work order for the project and ordered the building owner to secure the site overnight.

"This was a preventable tragedy and our hearts go out to the family of the worker who died. No building is ever worth a person's life. We will continue to investigate this incident aggressively and bring all appropriate enforcement actions against those responsible," the department said in a statement.

Over 100 firefighters responded to the scene. They added support to the second floor out of concern that it too might collapse.

Family members rushed to the scene, upset and concerned for their loved ones.

"It's nerve-racking, you know, families, friends have loved ones in there," said Anika James, an eyewitness.

First responders are on the scene of a partial building collapse in the Bronx.

Tragically, one worker lost their life and 5 others have been injured.