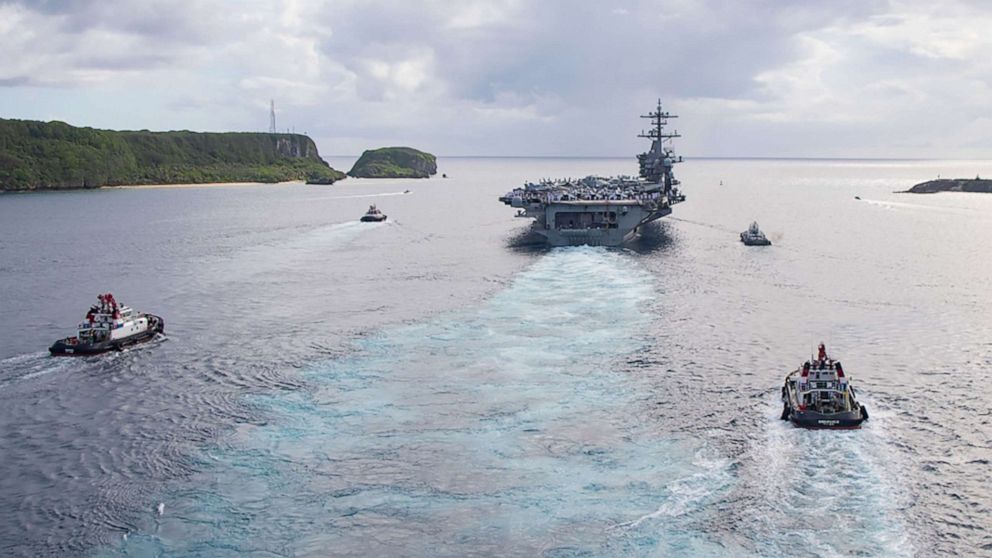 Two sailors aboard the aircraft carrier USS Theodore Roosevelt have tested positive for COVID-19 while the ship was conducting training off the coast of California and have been taken off the ship to self isolate, a U.S. Navy spokesman said Friday.

A mass outbreak of novel coronavirus aboard the carrier this past spring affected a quarter of the ship's 5,000 sailors led the Navy to put in place procedures intended to limit any similar outbreaks aboard its ships at sea.

"The Sailors self-reported after experiencing symptoms, received immediate medical treatment, and were transported off the ship for isolation," said Harrell.

Harrell said contact tracing has been completed and all crew members who came in contact with the two sailors who tested positive are quarantining aboard the ship.

"Theodore Roosevelt is aggressively applying all mitigation measures in accordance with the Centers for Disease Control and Prevention and Navy guidance in order to protect the health of our Sailors and stop the spread of the virus as we continue to identify and eliminate any of the virus's potential vectors," said Harrell.

The carrier is currently off the coast of San Diego conducting a short period of training and is expected to return to port as scheduled in coming days.

This past spring, nearly a quarter of the ship's crew of 4,800 sailors came down with the virus leading to a lengthy quarantine for all of the ship's crew on Guam. A sailor died from complications of the virus, and some were placed in intensive care, but the overwhelming majority experienced mild symptoms or were asymptomatic

The mass outbreak resulted in a series of controversial events that began with the removal of the ship's commanding officer, Captain Brett Crozier, and the resignation of the then-acting Secretary of the Navy Thomas Modly.

After the ship was cleared to return operations it finished its deployment in the Pacific before returning to San Diego in July.

The Navy quickly put in place new procedures for ships preparing to go to sea on lengthy deployments that have prevented similar episodes. The new rules include restricting crews to their ships, while in port, for at least two weeks and undergo regular screening.

And when at sea Navy ships are only allowed to make ports of call in a select number at five locations with Navy facilities that are categorized as "safe havens".

Because the Roosevelt is conducting short training cycles from San Diego the ship's crew is not experiencing the two week restriction before heading out to sea. But there daily procedures in place including temperature checks and modified work routines, and as they would during a deployment the entire's ship crew is wearing masks.

The Navy's rules have proven effective at limiting outbreaks at sea like those aboard the Roosevelt and the destroyer USS Kidd earlier this year. In late August, a small number of sailors who tested positive aboard the carrier USS Ronald Reagan after a port of call in Guam were removed from the ship. No further cases were reported as the Reagan continued with its deployment.

According to the latest Navy statistics there are currently 752 active COVID-19 cases among its sailors with more than 10,000 having recovered.