WABC
BROOKLYN, Iowa -- The reward for information that brings Mollie Tibbets home is nearly $366,000. Mollie's family believes that she is alive and that someone has her, and they hope the money will help bring about her safe return.

Experts believe that the higher the number, the more it could help.

"A reward helps to draw attention to a case and it helps motivate people to pay attention to it and if they have information, motivate them to share it with law enforcement," Chris Allen, the chief of the FBI's investigative publicity unit, told ABC News.

This reward fund is the largest that the Crime Stoppers of Central Iowa has ever collected, according to Greg Willey, the organization's vice president of public relations.

"We don't have these types of things happen too often," he told ABC News.

At least 180 donors have contributed to the fund, including both individuals and businesses, KCRG reports.

On Aug. 2, Mollie Tibbetts' family and Crime Stoppers of Central Iowa held a press conference encouraging the public to make use of the reward fund. Crime Stoppers emphasized that it has set up an anonymous tipline, and anyone using that tipline to send in information that brings her home will be able to receive the reward anonymously.

Tibbetts, a 20-year-old from Brooklyn, Iowa, has been missing since July 18. At the press conference, her loved ones spoke about what the search has been like.

"Every day I feel Mollie's presence with me. Sometimes I feel her just sitting on my shoulder," her mom, Laura Calderwood, said. "I don't know that I have the strength in me, and Mollie's lending me her strength. Every day. Every night."

Calderwood believes it's possible that someone took her daughter.

"We believe that Mollie is still alive, and if someone has abducted her, we are pleading with you to please release her," she said.

Her boyfriend, Dalton Jack, said that if someone took Mollie, he has a message for them.

"Everybody has a Mollie in their life," he said. "Imagine if this was you, somebody had taken your Mollie."
He added, "Do the right thing and let her go."

Send in any tips to tips@poweshiekcosheriff.com or place an anonymous call to 800-452-1111 or 515-223-1400. If the tip is related to a location outside the Brooklyn area, contact local authorities.
Report a correction or typo
Related topics:
mollie tibbettscollegeu.s. & worldcrime stoppersrewardmissing woman
Copyright © 2020 WABC-TV. All Rights Reserved.
RELATED 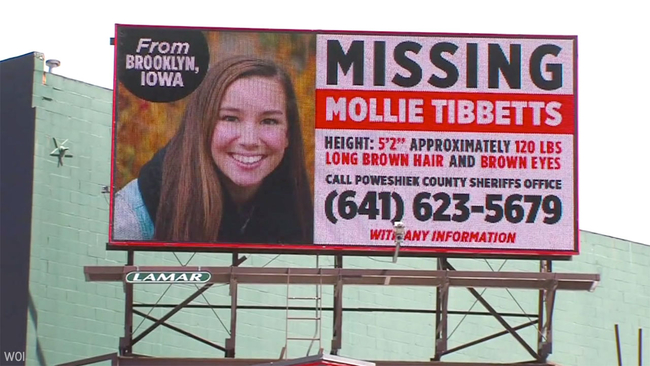 A timeline of Mollie Tibbetts' disappearance