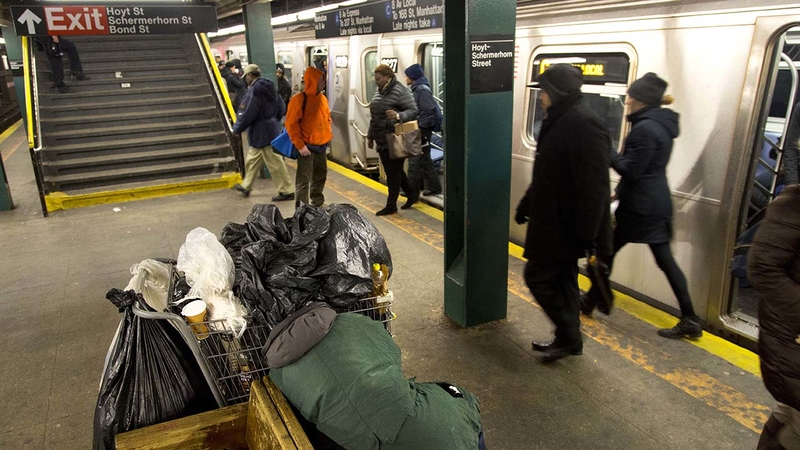 NEW YORK CITY (WABC) -- The number of homeless people living in the subways is 2,178, up more than 20 percent from last year, an MTA-sanctioned task force has determined.

The state will be cracking down on the city to ensure New York City provides more beds and safe services, as a big problem confronting the homeless is the lack of options for shelter. Officials said this increase is disproportionate to rates experienced citywide.

The task force issued a list of recommendations, including enhancing homeless outreach, expanding the MTA's police force by 50%, and educating the public on the MTA's rule of conduct. The MTA Inspector General is also being asked to monitor the homeless outreach efforts.

This is an expensive program for an already cash-strapped agency. The new police officers alone will cost the MTA over $50 million in just the first year. The agency hopes eventually, the city can contribute,

"We have to try. We are a group of compassionate people. We have got to take this very seriously," said Ronnie Hakim, the MTA's managing director.

Officials called the subway system a "de facto shelter "and "disservice to them and to the MTA's eight million daily riders" and said non-transportation activities frequently disrupt service, create delays, and can pose a risk to riders on the trains.

In addition, by allowing homeless individuals to stay within the system rather than finding them supportive housing or other resources, it poses a risk to their own health and safety.

The transit system often provides an opportunity for homeless individuals to panhandle and ask MTA customers for money, which can create a challenge in distinguishing the homeless from con artists.