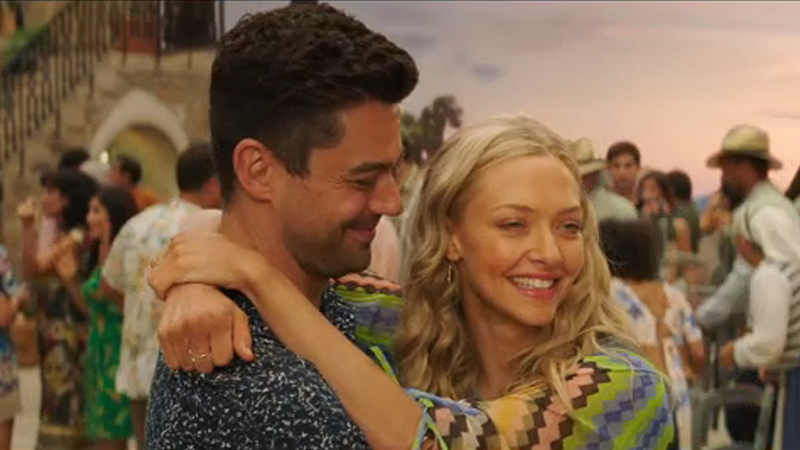 NEW YORK (WABC) -- It's been eight years since Meryl Streep and Amanda Seyfried told us the story of a bride-to-be searching for her real father, set to classic tunes from ABBA.

And to steal a line from the title, here we go again.

To anyone rolling his or her eyes right now, "Mamma Mia! Here We Go Again" isn't for you (and neither is this review).

Cher shows up near the end of the film, and Streep does too -- though her character Donna is dead, so she's there only in spirit at the re-opening of her hotel in Greece where her granddaughter is keeping her memory alive.

Sophie is pregnant, and fans of the musical will recall she has three dads because her mom slept with three guys one after another and can't be sure which guy is her daughter's biological father. We learn how that happened during lengthy flashbacks.

We see Donna as a young woman, played by Lily James from TV's "Downton Abbey." The trouble is she looks nothing like Streep, who as young woman had a stunning elegance that is difficult if not impossible to duplicate.

It's not believable that she could ever grow up to be Meryl's matron, so ultimately I couldn't buy into the film.

Any enjoyment I got came from the enthusiasm of those around me in the theater, most of them women.

So ladies, if you loved the first one, why not see more of the same? To make it more fun, I suggest you go as a group.