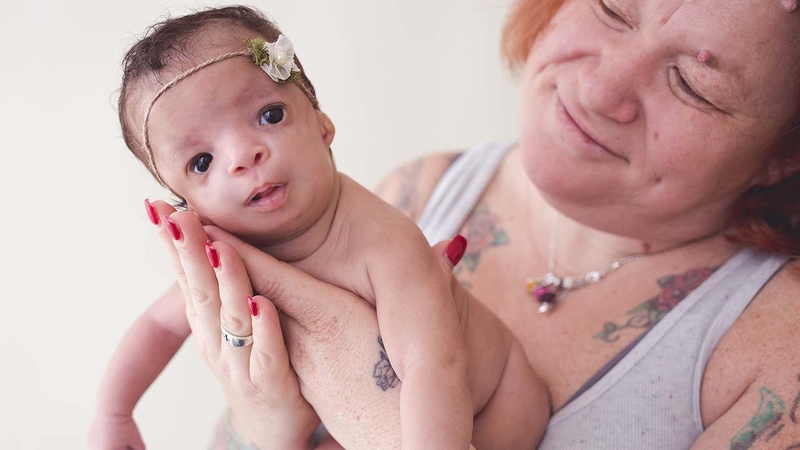 FORT WALTON BEACH, FL -- Abigail Lynn is supposed to be living with her adoptive parents in Georgia, but instead she is at home in Florida with her birth mother, Christina Fischer. This is not what Fisher had planned, but when Abigail Lynn's adoptive mother ran out of the hospital in tears seconds after seeing her because she was born with birth defects - Fischer decided to keep her baby.

When Fischer found out she was pregnant, she knew she was not in a position to raise the child herself. Fischer told the Northwest Florida Daily News she had already raised one daughter and thought she was done with children. The unborn child's father was not in the picture. Fischer was also living in an RV park and described herself as "basically homeless." However, Fischer said she does not believe in abortion and made the difficult decision to find an adoptive family for her baby.

Fisher did her homework and found an adoption agency that would help her baby find a forever home. Fischer thought a family in Georgia would be the perfect fit. Fischer says she communicated with the family during her pregnancy and thought everything was fine.

Fischer claims all her prenatal tests were normal.

"Nothing was detected," Fisher told the Northwest Florida Daily News. "They just told me her ears looked a little small."

On January 11, 2016 Fisher gave birth to Abigail Lynn. Doctors diagnosed Abigail Lynn with Treacher Collins, a very rare genetic condition that affects the bones and tissue of the face causing underdevelopment of certain facial structures including the jaw and cheekbones.

When Fischer saw her little girl for the first time, she thought the baby was still perfect.

Abigail Lynn's adoptive mom was also at the hospital when the baby was born, but she felt differently.

"I let her (adoptive mom) take the other wristband into the NICU," said Fischer. "She came out crying, and left the hospital. We never heard from them again."

Fischer said the adoption agency was "appalled" by the news and "flagged" the family in the agency's system.

Now Fischer is committed to raising her baby girl. Photographer, Oksana Peery heard about Fischer's story from a friend in a photography class. Peery has her own business, Oksana Peery Photography, and offered to take photos of Christina and Abigail Lynn.

Abigail Lynn may need reconstructive surgery down the road, but her condition will not prevent her from having a typical life.