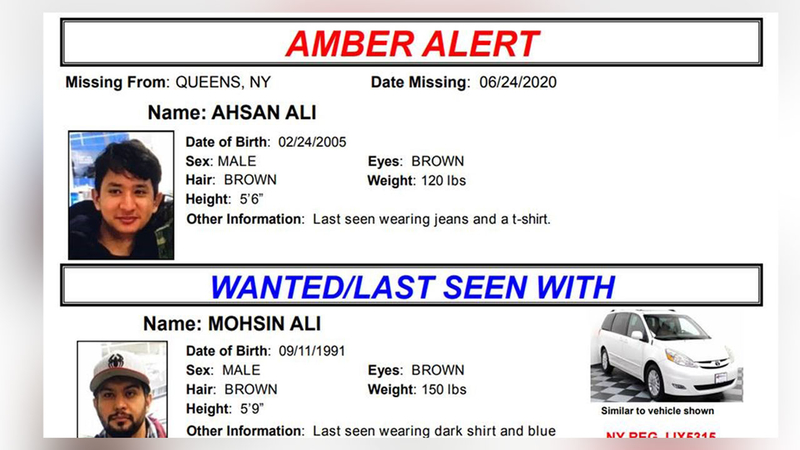 BAYSIDE, Queens (WABC) -- An Amber Alert issued Wednesday after police say a 28-year-old man abducted his 15-year-old brother at knifepoint has been canceled after the teen was found safe.

Authorities say the suspect, Mohsin Ali, was at his parents' house on 46th Avenue in Bayside around 4:30 a.m., asking his parents for money for drugs. They said no, and he reportedly took a knife from the kitchen and began cutting himself.

He then ordered his brother, Ahsan Ali, into his parents' car, police say, and drove off without permission to take the vehicle.

Police issued the Amber Alert over concern for with his welfare and the welfare of his younger brother.

Both brothers were found together around 2:45 p.m. on 204th Street and Northern Boulevard in Queens.

The older brother was taken to a hospital for self-inflicted injuries.

The younger brother was not harmed.

Neighbors knew the family but said they never had much interaction. Those who live nearby say they never saw anything that would lead them to expect this to happen.

"I would see the family in the yard during the pandemic just playing games, like baseball, volleyball, just doing something to stay busy," Karen Dussack said. "I never expected it by us."